Fierce bitter winds, unexpected thunder and lightning and snow hail pelting the windows has been the norm the past two weeks.  The closer it gets to Halloween on nights such as these, it's hard not to see or hear more than weather and shadows when you are outside after dark; your senses on high alert.  It's the time of year when everything is restless and waiting. 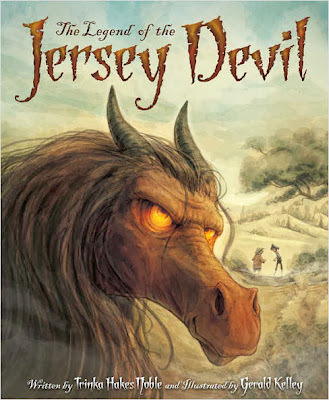 Most locales have their fair share of haunted houses, ghost stories and unsolved mysteries.  Whether reading, telling or listening to any one of them during an autumn tempest on or near the thirty-first of October, you'll be hard pressed not to lock all your doors and windows.  Author and longtime resident of New Jersey Trinka Hakes Noble has written such a tale, The Legend of the Jersey Devil (Sleeping Bear Press) with equally frightening illustrations by Gerald Kelley.

Long ago, in 1735, when the British Crown ruled New Jersey, a strange and terrifying event took place on a remote stretch of land called Leeds Point.

Late at night during a nor'easter of epic proportions, a woman with twelve children called Mother Leeds is giving birth to her thirteenth child.  Nearing delivery two midwives in attendance, Hattie Higbee and Essie Turnbuckle, hear her cry out "Oh, let it be a devil!"  With the storm reaching its peak, the child is born.  But readers, this child is like no other.

This monster, this creature, flies around the room and up the chimney.  Crazy with fear the women leave Mother Leeds, awakening the people in their small village.  Nearly incoherent, physical features such as bony horse head, long scaly body, large bat wings, forked tail, claws for hands, hooves for feet, horns sprouting from its head and eyes flashing red then yellow are described by the two.

Close to the village, the new resident hears all, delighted with his first impression, knowing this place will be his home for a very long time. As months pass all sorts of unexplained events begin to take place, hens not laying eggs, milk going sour, and wells drying up.  Folks, of course, blame this devilish intruder.

No one can catch him.  Children no longer play outside.  News of this fiend travels to outlying areas.  A preacher arrives hoping to banish this misery from among the people but he nearly meets with a fiery end.

His overheard story of the Jersey Devil brings even more trouble to the village.  They need to rid themselves of this horde of people bent on claiming money offered by two visiting schemers.  Unknown to the people a bargain is made and a legend, continuing to this day, is born.


Before telling us the origin of the Jersey Devil, Trinka Hakes Noble's introduction, replete with eerie words, will have goosebumps appearing at will.  Her descriptions of food being served, the use of lanterns and candles for light, fireplaces for heat and horses the primary means of transportation, take us back into history.  Dialogue between the characters as well as the narrative are in keeping with the unearthly thrills of the ensuing story. Here are a couple of examples.

And, lurking in its black swamps and murky bogs are hidden secrets and evil stories that can only be told on the darkest of nights...
...for 'tis believed the place is haunted.

Outside, she met Hattie Higbee.  The two clutched each other, bending into the raw wind.
" 'Tis rumored she dabbles in witchcraft," whispered Essie with fright, "but we must help."
"Oh, aye," trembled Hattie, "but I shudder to think, this being so close to Halloween."


Picturing the Jersey Devil himself on the front jacket and cover and a woman gasping in horror on the back, Gerald Kelley attracts readers straightaway to this spine-chilling tale.  Featuring the Pine Barrens on the title page draws us further into the place.  Dark stormy skies forked with lightning provide the backdrop for the introduction, text placed on parchment with aged edges.

For most of the book, double-page paintings in darker hues, dusty golden overtones to bring readers into the past, create a feeling of tension and apprehension.  Having much of the text placed on parchment, smaller illustrations framed in worn, shadowy sides, enhances the days-of-old essence of this story.  Fully animated features on the characters leave no doubt as to the fear they are experiencing in light of the Jersey Devil living among them.  One of my favorite illustrations is near the beginning right after the birth.  Two pages are filled with darkness, lightning is flashing, windows in the village glow with candlelight, as the Jersey Devil, his head filling an entire page, overlooks the scene.

Look no further for a haunting Halloween tale or the perfect fit for a scary story request than The Legend of the Jersey Devil by Trinka Hakes Noble with illustrations by Gerald Kelley.  Superb storytelling and visuals make this a shivery treat.  After reading this you'll think twice about being in Pine Barrens after dark or anywhere legends freely roam.

To discover more about the author and illustrator, follow the links embedded in their names to their respective websites and blogs.  At the publisher website, linked here, you can view and read excerpts from the title. Update:  Here is a link provided by Gerald Kelley to a documentary video about the Jersey Devil.

Update:  Here are some tweets which appeared in my feed October 20, 2014 from Gerald Kelley showing the process for developing the illustrations and several which appear in the finished book.

The preacher stood in front of the fire & told of his harrowing encounter with the Jersey Devil to the inn's guests. pic.twitter.com/o3WtGzbEYR
— Gerald Kelley (@GeraldKelley) October 20, 2014


"I know hideous when I see it," bickered Essie. "It had two horns growing out of his head & eyes that burned red!" pic.twitter.com/BhzWPhiOgL
— Gerald Kelley (@GeraldKelley) October 20, 2014


And many experienced campers have been driven out by unearthly sounds on the darkest of nights http://t.co/x3ZhfK333s pic.twitter.com/tvDkcmGnYZ
— Gerald Kelley (@GeraldKelley) October 20, 2014


Some initial thumbnails from Legend of the Jersey Devil. A few didn't make it. pic.twitter.com/voCBLcI02j
— Gerald Kelley (@GeraldKelley) October 20, 2014


One of my Jersey Devil designs was a bit scarier than what we went with. pic.twitter.com/mrUpRvKZmy
— Gerald Kelley (@GeraldKelley) October 20, 2014