It's not hard to imagine frigid temperatures here in northern Michigan as winter has finally wrapped her chilly fingers around our lakes and forests.  But what is hard to imagine is a dog surviving for several days on an ice floe floating on a river swiftly moving toward a large body of water.  On the other side of the Atlantic Ocean on the continent of Europe in the country of Poland that is exactly what happened as the whole world watched. 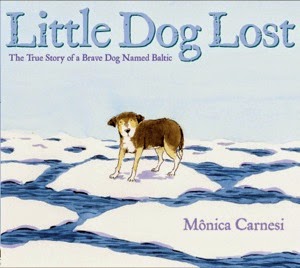 On January 23, 2010 when glacial temperatures were the norm, a small dog was first spotted on the ice in the Vistula River at the town of Grudziadz; the Baltic Sea its destination.  Little Dog Lost:  The True Story of a Brave Dog Named Baltic written and illustrated by Monica Carnesi captivatingly portrays the events surrounding Baltic's journey.

Initially when the dog is spotted by a group of children their cries bring a group of firefighters forming a chain into the waters of the river.  A fast moving current speeds him out of reach.  For two nights and days no rescue is made as the dog moves toward the river's end.

When the little brown and white dog is next spotted he is fifteen miles away from land out in the Baltic Sea.  At first the crew of the ship believes him to be a seal.  He will not leave the ice to jump into a long-handled net; falling off the ice into the freezing waters.

Those on board are unable to glimpse him, fearing he may have drowned.  After determined efforts bring him once again to the ice floe the relieved crew places a small boat in the water, moving gently toward his precarious position.  A seaman is able to grab the dog, bringing him into the sanctuary of his craft.

Once dry and warm the little dog seeks out his rescuers enjoying a sausage breakfast with them.  Attaching himself to the man who plucked him from the ice, the little dog receives a new name and a new home, Baltic of the Baltica.

Using spare text alternating between the telling of the tale and those who are speaking directly to the dog, readers are held in suspense throughout.  Using her watercolor, pen and ink illustrations Carnesi brings readers into that narrative holding them there until the satisfying ending.  The blending of the two is flowing and flawless.

Endpapers done in a cool, pale purple gray (Brrrr...) picture Baltic as an inset on a map of the Vistula River as it flows toward the Baltic Sea.  A smaller map of Poland, in its entirety, is tucked into this visual.  On the front and back of the title page readers are given a possibility of how Baltic may have found himself on the ice in the river.

Carnesi's delicate artwork spreads across two pages, appears as a single framed page or bleeding off a page, a small uneven-edged inset or multiple frames within a single page depending on what she wishes to convey.  Color choices not only reflect winter's descending in this part of the world but the emotions of the characters as the story develops.  Readers will identify with and cheer for this little dog that beat the odds.

Monica Carnesi, in this first picture book, Little Dog Lost:  The True Story of a Brave Dog Named Baltic, gives readers a glimpse into the heart of this courageous canine and those that saved him.  There is nothing little about the impact of this book; it is storytelling the way it is meant to be.  I can hear the sighs and ohs already once it has been shared with the children; the loudest will probably be me.

Monica Carnesi does include more information in her Author's Note at the book's end as well as at her web site linked above.  She has a fun little Baltic paper doll (dog) that can be printed and stood up.  Here are a couple of other links about this truly amazing journey.
Posted by Xena's Mom at 6:11 AM