He Was Here A Minute Ago...

It is hard to put into words the power of a wordless picture book that is done well.  It uniquely transports readers into the realm of their own imaginations; where their creativity can match or exceed those of the author/illustrator. In his Caldecott Award acceptance speech for Tuesday, David Wiesner states:

A wordless book offers a different kind of an experience from one with text, for both the author and the reader. There is no author’s voice telling the story. Each viewer reads the book in his or her own way. The reader is an integral part of the storytelling process. 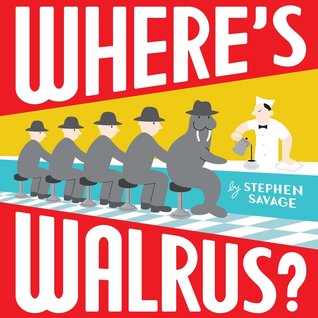 Stephen Savage, illustrator of Polar Bear Night, 2004 (a New York Times Best Illustrated Children's Book), by Lauren Thompson and of the Margaret Wise Brown title, The Fathers Are Coming Home, 2010, has authored and illustrated a new book, Where's Walrus?, which was released in February of 2011.  Without words readers are privy to the escapades of a walrus that flees the confines of his tank in the zoo.  At every turn of the page mirth greets the eyes; smiles and laughter will quickly follow.


A turquoise and white diamond motif picturing scenes from the story line are featured on the front and back endpapers.  The title page sets the stage with Walrus peacefully sleeping in the center of his tank within the gates of the zoo, the title across the tank in white block letters.  When turning to the dedication page the head of Walrus is pictured and extends across two pages winking; in that moment readers get a hint of what is to come.

As the tale begins four zoo animals, the elephant, lion, bear and peacock, as well as the zookeeper are napping but walrus, eyes shifted to the zookeeper, is not and the open gates are a tantalizing invitation.  As Walrus makes for the entrance and the fountain in the distance, the zookeeper is shocked into wakefulness.  From that fountain, to a diner, a store window exhibit, to a bricklaying construction site, a fire brigade, to dancers on stage, painters in a park and finally to a swimming competition, the walrus evades the vigilant efforts of his pursuer.

By donning a variety of headgear and assuming the appropriate pose Walrus blends into the surrounding views no matter the closeness of the zookeeper.  As Walrus takes the winning dive his cap falls off, disclosing his true identity to the surprised onlookers.  To dissuade any future adventures the zookeeper hatches a plan that brings cheer to Walrus and his admirers.

Done on Adobe Illustrator Savage generously uses white space accentuating the crispness of his images.  For the most part bold primary colors delineate the action but Savage is not afraid to break that trend as in the case of the pink buildings behind the fountain.  From the open cover which portrays Walrus and the zookeeper at opposite ends of a diner counter, the comedy is found in the two's nearness; so close but so far away.  Then too, Savage does enhance that humor, as in having Walrus in the park masquerading as a artist painting a portrait of none other than the zookeeper.

Engaging, highlighting the wit of Walrus's ability at camouflage and the puzzled zookeeper in hot pursuit, readers of any age will laugh loud and long at the genius employed by author/illustrator Stephen Savage in his book, Where's Walrus?