Blast to the Past

Deborah Wiles, author of Countdown, has written a piece about our American history so well that I feel she must have been in my skin when I was growing up.  She captures the mood, family values, student life, fashion, food and political climate with absolute clarity. 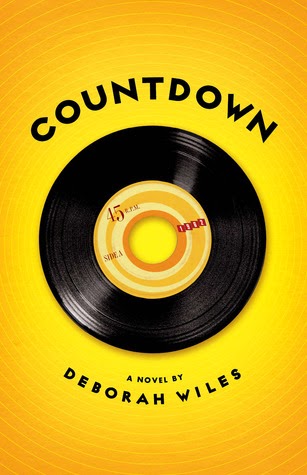 The year is 1962 with the Cold War in full swing; President of the United States John Fitzgerald Kennedy and First Secretary of the Communist Party of the Soviet Union Nikita Khrushchev are escalating the tone of their verbal battles.  In October of that year the Cuban Missile Crisis rears its ugly head creating a environment of fear in the daily lives of all Americans across the United States.  Wiles has chosen fifth grader, Franny Chapman, to narrate these turbulent times.

Through her eyes we witness the life of a military family stationed close to Washington, D. C.  Readers are privy to the struggles of young people her age as the book's first sentence clearly illustrates,

I am eleven years old, and I am invisible.

From being on the outs with her best friend, Margie, to wondering why her college-age older sister Jo Ellen seems to be distancing herself more and more from the family (what are those mysterious letters she hides in her hope chest), to dealing with Saint Drew her younger brother and the conflicting emotions of embarrassment and love she feels for her Uncle Otts who is still reliving the horror of World War I, Franny is a character to remember and embrace.

What sets this historical fiction apart is the documentary style that the author employs interspersing the storyline with quotes, photographs, parts of newspaper headlines and book covers (didn't every girl read and wait for the next Nancy Drew book to be published), ad slogans, and song lyrics revealing a true slice of life at that time.  Rather than being a distraction these elements enhance the dynamics of family life that she gives voice to with witty, well-written dialogue between all the parties.


Jo Ellen turns off the Hoover when she sees me. She's wearing one of Mom's aprons, and her hair is wound in pin curls that peek out from underneath a wispy green scarf.
"Red alert," she says.  Her voice is low and her eyes are puffy.  "Everybody left like they'd been struck by lightning as soon as Uncle Otts banged through the door, blathering about spies in the bushes and blueprints in the mailbox."  Jo Ellen wipes her nose with her apron and pushes the vacuum cleaner toward the hallway closet.  "Drew took him downstairs."
"Where's Jack?" (the dog)
"He's downstairs, too."
"Have you been crying?" I ask.
"Of course not, " Jo Ellen says.
Dishes crash against one another in the kitchen.  The roar from the faucet is so loud it sounds like Mom is washing dishes in a typhoon.
"Was it bad?" she asks me, nodding toward the street.
"Terrible.  He held everyone hostage.  I'm embarrassed for life."
"I'm sorry, Squirt."  Jo Ellen winds the vacuum cleaner cord around its knobs and sniffs.  "Take heart.  You weren't standing next to Mom when Mrs. Ross flew out of here like she was on fire.  She almost ran over Mrs. Hornbuckle."
"Was it bad?"
"Mom had a stroke," Jo Ellen says, her delivery picking up speed as she winds the cord faster.  "We heard the air-raid siren from school-it was clear it was a drill and not an attack, but that was bad enough--they've never used that siren during the week, and then when Uncle Otts came running in..."

Deborah Wiles is a wordsmith of considerable talent bringing to readers not only history but the strengths that bind families together in their daily lives which are often challenged by forces not of their making.  Much as an artist uses a particular medium to bring us a visual, so too does Wiles with her vivid writing.  Countdown is an outstanding beginning to what appears to be a promising trilogy.

At the book's end she includes further explanation on the Cuban Missile Crisis, what compelled her to write this particular story and the beginning of a great bibliography.
Posted by Xena's Mom at 1:11 PM