Readers are in for a rockin' roller coaster of a ride in Rick Riordan's latest and greatest, The Lost Hero.  This first book in the new Heroes of Olympus series takes fans back to the familiar territory of Camp Half-Blood.  Who could resist this opening line?--Even before he got electrocuted, Jason was having a rotten day. 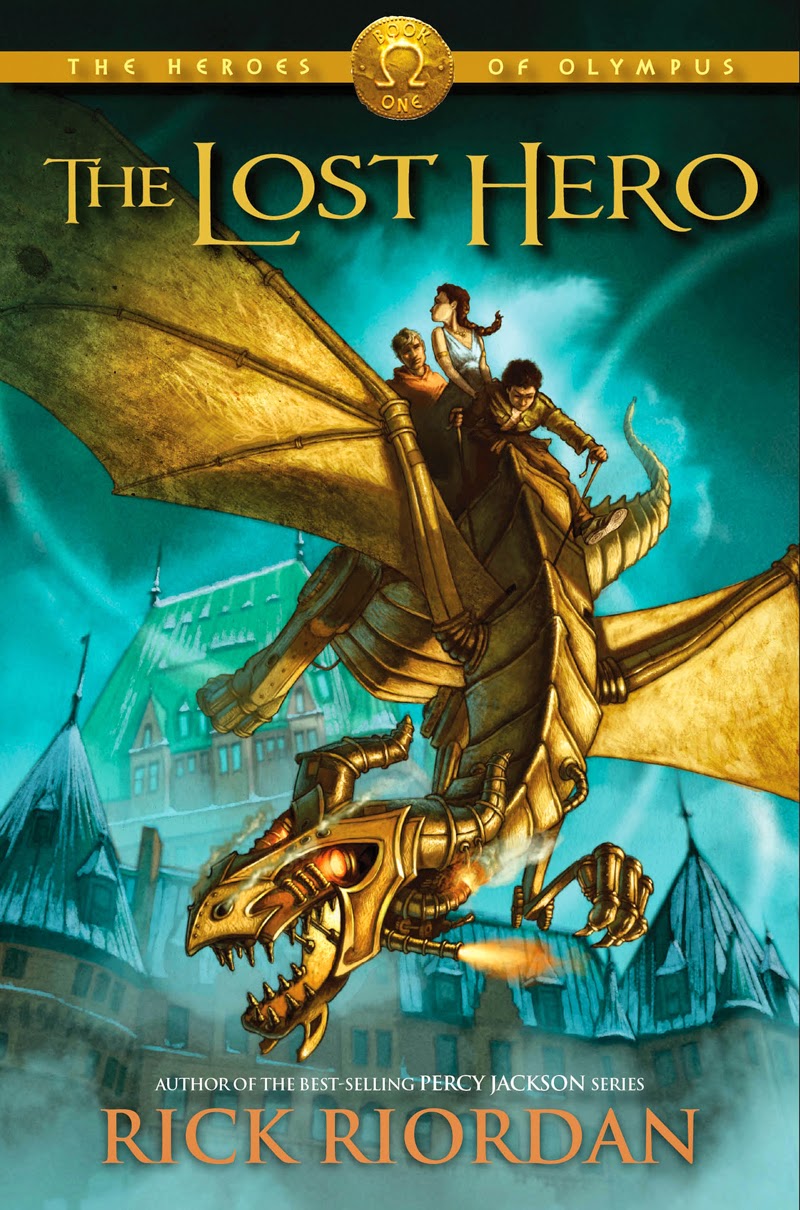 To begin Jason finds himself on a bus with other students attending the Wilderness School; a school for those teens that live on the wrong side of the law.  He does not recognize his best friend Leo or his girlfriend, Piper.  When the bus arrives at its destination of the Grand Canyon an unnatural storm brings in the evil wind spirits, venti that threaten each of their lives.

Jason finds that a gold coin in his pocket can bring forth a weapon of gold that suits whatever situation presents itself to him.  He is also amazed to learn that his father is non-other than the King of Olympus, Zeus.  Finding himself at Camp Half-Blood after this first battle should be a relief to Jason but his loss of memory has him feeling uneasy.

He somehow knows that this is not where he belongs.  If so, why is he here?  And more importantly where has he been instead of at Camp Half-Blood?

From as far back as he can remember, Leo, has had a gift with tools.  Growing up by learning with and helping his mother in her workshop, Leo can build just about anything.  He also has a secret.

Calling forth fire through his emotions or for protection has cost him more than it has helped him.  In his younger days his mysteriously appearing babysitter offered words and situations of instruction and encouragement.  Imagine his surprise at finding out she is the Greek goddess, Hera, who is currently imprisoned by a force greater than the gods.

Hephaestus, god of blacksmiths and fire, has claimed him as son.  Where has this god been all his life especially when his mother died?  What is the explanation of the air-hanger-size cave in the woods around Camp Half-Blood that Leo discovers?  What is this Bunker 9?

Leo is not the only one with a secret.  Piper's famous movie star father is missing.  Appearing to her in dreams, a huge ugly creature has told her that her father will lose his life unless she betrays her friends.

Even though the time spent with her father has been infrequent during her lifetime, her love for him is strong.  When it is revealed that Aphrodite, goddess of love and beauty, is her mother, she understands that her father's Cherokee heritage is not the only trait that will lend her strength when needed.  But can Piper use those strengths to help both her friends and her father?

These three new champions of the demi-gods have until the solstice, just four short days, to save Piper's father and free Hera.  Through the use of visions and dreams of each of the heroes Riordan guides the reader through the events that have culminated in this quest that begins that fulfillment of the Great Prophecy:

Seven half bloods shall answer the call,
To storm or fire, the world must fall,
An oath to keep with a final breath,
And foes bear arms to the Doors of Death.

Alternating chapters between the voices, thoughts and actions of each of these characters creates a tension that supersedes the term, page-turner.

This past spring when Riordan unveiled the first book in the Kane Chronicles, The Red Pyramid, which opens up the world of ancient Egyptian mythology to readers, I personally felt at that time that his writing was sharper; more descriptive and finer tuned.  Unlike what my father used to say, Anticipation is greater than realization, The Lost Hero takes it up another notch.  It's a total blast!  It seems downright cruel that fans and readers have to wait an entire year for the second book in the Heroes of Olympus series, The Son of Neptune, which is coming in the fall of 2011.  We can only hope that in the meantime another book in the Kane Chronicles will appear as planned in the late spring of 2011.

In addition to the web site in blue above check out Rick Riordan's blog .
Posted by Xena's Mom at 7:23 AM