An Appetite For Laughter

Sometimes when a book ends, it's not the final conclusion.  Oh, no . . . there is more story to tell.  The characters have a lot more to say.  They have a lot more to do.  When we are introduced to them, it's just a beginning full of promise. 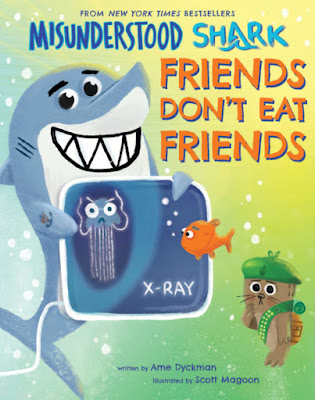 As the final pages and the closing endpapers, are disclosed in Misunderstood Shark (Orchard Books, an imprint of Scholastic Inc., April 24, 2018) readers feel disbelief as they try to digest what has happened.  The unknown fate of the fabulous Underwater World with Bob leaves us (and him) in the dark.  The companion title and sequel Misunderstood Shark Friends Don't Eat Friends (Orchard Books, an imprint of Scholastic Inc., January 29, 2019) written by Ame Dyckman with illustrations by Scott Magoon makes everything less murky as we peer into the depths of the water.

Shark ATE ME!
Get me
OUT OF HERE!

As we barely get the page turned Shark has ejected Bob, a jellyfish, out of his stomach and the show does indeed try to go on.  The problem is Bob having a tizzy about being consumed by Shark.  When Shark realizes people are watching him, again, he utters his now famous defense.

Apparently, he was giving Bob an up-close-and-personal view of his inner self.  Bob's not buying it until his crew reminds him of his show.  We are then privy to one of his fun facts about sharks.  We go quickly from bones to cartilage to boogers. Bob is still not placated.  He WAS eaten.  Shark demands proof.

Suddenly the video feed is stopped.  Shark has expelled something else.  It's gross!  It's Bob's glasses.  Bob with dignity and an air of righteousness relates another fun fact about shark stomachs. (Who knew?)

Bob issues an ultimatum, followed a third fun fact.  Shark is in tears.  An argument about the definition of friendship has Shark clearly upset and he leaves.  When one of the crew remarks on his state of being, Bob panics.  They must STOP Shark!  Bob continually shares fun facts as they locate Shark.

There is a misunderstanding about Shark being in his cave pouting and a deeper discussion about the characteristics of friendship.  In an al-arm-ing turn of events everyone, Bob, Shark, the crew, and the people are horrified.  One watery resident is not.  Will this episode be a win for friendship?  Will the show continue?  Will anything change?  There are so many questions.  Stay tuned.


No matter how many times you read this title, it is guaranteed you will be giggling and guffawing.  This is what happens when words and combinations of words are written by someone who has comedy running in their writer veins. Ame Dyckman is one of those people. Her sense of pacing is pure perfection.

The conversations between Bob and Shark along with the side commentary by the recording crew, other dwellers in their watery realm plus the people watching completely engage readers from endpapers to endpapers and everywhere in-between.  It's as if we are a part of the story.  With Shark in complete denial about who he is and what he is capable of doing, we are constantly laughing.  Here is a passage.

He's in his Sulking Grotto!

THIS is his feeding frenzy? SUGAR?

As soon as you open the almost-matching dust jacket and book case, you'll feel the corners of your mouth curving into a smile.  From the back, left, to the front the recording and directing crew, and the tiny orange fish are aghast at what Shark has done and is doing.  How can he be grinning so broadly when he's eaten Bob?  Understandably Bob is not happy.  The X-RAY cord on the front runs to the back with the ISBN acting as a power source.  There is a clever touch to the title text with the wave and the shape of "A" in SHARK.

The canvas extends to both flap edges.  At the bottom of the back flap we see a new character who plays a part in this new volume.  On the front flap conversations are already beginning with comedic commentary.  Instead of wearing swimming gear as they did in the first book, Ame Dyckman and Scott Magoon are wearing boating head gear in their portraits on the back flap.

Scott Magoon uses every inch of space to start and end the narrative along with his pictorial interpretations beginning and concluding with the endpapers.  His full-color palette with vibrant colors and bold sweeping lines invite reader participation.  Altering his point-of-view brings us further into the tale of Bob and Shark.  On the verso and title pages, text is held in place by Shark's body, the clapperboard and the squid's hat band.

To add to the back and forth conversations and arguments of Bob and Shark small images are grouped on single pages before broadening into a double-page picture for emphasis.  At one point Scott Magoon adds a diagram/cut-away of a shark's body with Shark's changes which heightens the hilarity.  The variations in the background colors tend to determine mood and upcoming shifts in the narrative.

One of my many favorite illustrations is on a single page.  The background has gone a darker shade of ghastly green.  We are shown a close-up view of the scene.  Shark has turned green and is trying to hold his mouth closed.  His eyes are yellow.  The octopus, wide-eyed and frantic, holding the microphone boom and wearing headphones is yelling.

We know what's going to happen, but we have no idea why or what the results will be.  We must turn the page.

If you like laughter, books about sharks and other sea creatures, and titles about the ups and downs (and eating) of friends, Misunderstood Shark Friends Don't Eat Friends written by Ame Dyckman with illustrations by Scott Magoon is an excellent selection for you.  This is without a doubt a read-aloud winner.  You're sure to have requests for "read it again."  I highly recommend this title for your personal and professional book collections.  Be sure to follow the link to my blog post about the first book.  I include other titles you could use for a "swimmingly-super" story time.

To learn more about Ame Dyckman and Scott Magoon and their other work, please follow the links attached to their names to access their websites.  Both Ame and Scott have accounts on Twitter.  You can find Scott on Instagram.  You'll want to visit the publisher's website for some fun additional activities.  Ame Dyckman was interviewed this past November at Writers' Rumpus.
Posted by Xena's Mom at 1:52 PM