RUN! SWIM! For Your Lives!

Having survived more years than we can imagine, they have our deepest respect and for some of us, our fear.  They are serious apex predators of the sea.  To utter their name at an ocean beach full of swimmers is certain to have people scurrying in total panic.  In reality we harm more of them in any given year than they harm us. 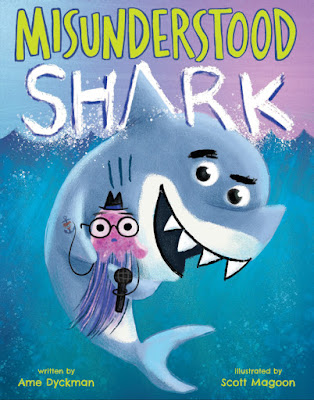 Sharks have inspired blockbuster movies, week-long television series and bestselling books.  One of the newest titles with these fascinating fish as a central character is Misunderstood Shark (Orchard Books, an imprint of Scholastic Inc., April 24, 2018) written by Ame Dyckman with illustrations by Scott Magoon.  By the time you finish reading this book your respect for sharks will be strengthened as you roar with laughter.

Bob barely has his first few sentences finished when a grinning shark bursts into view.  Needless to say several of the crew, two squid, are ready to run.  Bob, a jellyfish, reminds Shark not to eat a fish, a tiny orange one in his grasp, in front of the people watching.

When Shark realizes people can see him, his sweet reply is contrary to what they and everyone on the watery set believe to be true.

He says he was only showing the fish his new tooth.  Trying to recapture the audience's attention Bob entertains us with a

about sharks and their teeth.  Continuing to speak Bob thinks he is chatting with Shark but the wily predator is after something, a baby seal, swimming on the surface.

A similar scenario ensues with readers learning another informative item about sharks and their appetites.  Just when Bob (and dare I say readers) is beginning to trust Shark, he takes off in hot pursuit of an enticing scent.  As Shark speeds toward

Bob decides to give us another interesting detail about sharks and their sense of smell.

Shark is closing in on the source of the blood.  People are scattering across the sand, leaving their belongings behind.  Shark is despondent at this treatment.  He was only trying to help.  Bob and the two squid are offering comfort (and comedy) at this current situation.  Will an act of compassion change the dynamics of Underwater World with Bob?  Stay tuned.

When it comes to writing humor Ame Dyckman is masterful.  By telling the tale through dialogue, it's as if we are viewing this entire show in real life.  Even before the narrative starts, the comments of the television crew are sure to have readers smiling.  They continue to offer tidbits of opinions heightening the humor.

By using repeating phrases in each situation Ame invites audience participation.  As we join in Bob's and Shark's refrains, we have no idea what Shark will say next, but when he does answer it's so ridiculous we can't help but laugh.  This rhythm sets us up grandly for the surprising conclusion.  Here is a passage.

As soon as you open the dust jacket you know you are in for a delightful treat.  The image stretches from flap edge to flap edge.  On the back flap, Ame and Scott wearing appropriate swimming gear for above and below the water look as though they are characters in the book.  A group of green and blue fish swims below.  On the front flap Bob and the two squid offer comments intermingled with the blurb.

Looking at the front we already know things might not go as Bob plans.  His look and the expression on Shark's face are not quite the same.  The design cleverly places Shark's fin in place for the letter "a".  To the left, on the back, the octopus, the cameraman, the two squid, the tiny orange fish and the baby seal are watching.  The ISBN is placed on the clapperboard.  The sea creatures, Ame and Scott are varnished on metallic blue hues.  On the book case all of the text has been removed except for the clapperboard.  The ISBN is replaced with the title of the show.

The opening and closing endpapers are part of the story.  The squid, Bob and Shark offer conversation on both sets.  One features the sea in daylight and the other as darkness comes.  On the title and verso pages, the dedications and publication information are placed inside air bubbles.  One of the squid is holding the clapperboard with the title text (slightly alerted) on it.

All of the illustrations are bold and bright spanning single or double pages.  Sometimes Scott Magoon places a series of illustrations on a single page to indicate the passage of time and to accentuate pacing.  There is even a dramatic vertical, double-page picture.  To give us an indication of the importance of a particular point in the story the point-of-view will be switched; when Shark first sniffs the blood.

The layout of the elements is excellent; when Shark first appears during the show, when Bob is following Shark as he swims toward the baby seal, or when Shark starts to cry at the beach.  Readers will be looking for all the extra details like the tattoo on Shark's fin.  And the facial expressions on all the characters are outstanding.

One of my many favorite illustrations is a two-page image.  It's a scene with Shark sobbing at the people running away from him.  A first aid box with three bandages falling out of it is in the water next to Shark.  Beneath him Bob is talking to listeners (readers) about how likely it is to be bitten by a shark as opposed to being bitten by a person.  A crab, clam and starfish are watching.  On the right the two squid, one holding the clapperboard and the other the microphone boom pole offer opinions.  The first is wearing sunglasses on its forehead.  The other is wearing earphones.  These characters are all placed in an underwater seascape.

To learn more about both Ame Dyckman and Scott Magoon and their other work, please follow the links attached to their names to access their websites.  Scott has loads of extras about this book on his site.  Both Ame and Scott have Twitter accounts.  You can find Scott on Pinterest and Instagram.  The cover for this title was revealed by Scholastic Ambassador of School Libraries, John Schumacher, on his blog, Watch. Connect. Read.  He chats with both Ame and Scott.  Next you'll want to head over to the publisher's website to see what they offer regarding this title for readers.  Enjoy the videos.