He was an archer, fashioning his own arrows and customizing his bows.  Each autumn he would enter the woods before daybreak, waiting and watching.  Once I was old enough I would walk with him.  Before we got to our spot, light permitting, he taught me the names of trees and plants and their possible uses.  He was a man who appreciated nature, learning to understand the signs she offers. 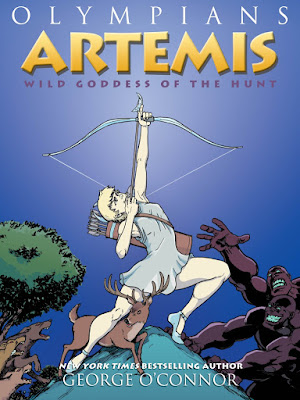 This is why for years, as a sport, I would practice with due diligence at straw bales in our back yard, taking the stance, nocking the arrow and pulling back the bow string, steady and sure before the release.  Artemis: Wild Goddess Of The Hunt (A Neal Porter Book, First Second, an imprint of Roaring Brook Press, January 31, 2017) written and illustrated by George O'Connor is the ninth volume in his continuing series Olympians.  This entry, like the others, will have you turning pages faster than you thought possible; spellbinding from beginning to end.  It might have you wanting to begin or continue archery skills.

My son has the muses to sing his praises and paeans.  Who shall do so for Artemis?

That honor falls to her mother to begin.

Leto, mother of twins, Apollo and Artemis, begins by telling of her love for Zeus, the treachery of Hera, queen of the gods and the birth of the children.  When the children are older, Zeus asks them to come to Mount Olympus to live.  Not shy in the least of her royal father, Artemis, when asked what she desires, names specific qualities in her bow and arrows, numbers an entourage of people in her hunting party and to attend her, a group of hunting dogs, a chariot, a large portion of land, mountains, and the ability to hunt animals which dwell there.  In addition she asks for those traits which place her as a guardian of girls, women in childbirth and ruler of beasts.  She concludes by requesting Zeus to promise she will never marry or have children.  And so it is.

Artemis and Apollo are very protective of their mother, knowing living on Mount Olympus is not easy.  They shield her from earthly enemies.  When a mortal, Queen of Thebes, disregards Leto, it is a deadly mistake for her fourteen children.  It is Leto who eases her pain.  You can still see her if you venture into present day Turkey.

If you are a hunter who looks upon Artemis when you should not, you might become the hunted.  If you are the twin sons of Poseidon, Otus and Ephialtes, continuing to court Hera and Artemis, regardless of Zeus throwing you off the mountain year after year, your days are numbered.  One of the most tragic stories of Artemis is of her relationship with Orion.

Orion is a giant hunter of great skill whose birth is unusual. (I'll let you read it.)  Orion hunted throughout the world worshiping Artemis, hoping to gain her attention.  This he finally does and the two become hunting partners.  Orion believes their relationship is more but when Artemis explains this cannot be and even tells him a story similar to theirs, he is furious vowing to slaughter all the animals.  Leto, Apollo and Artemis all know what needs to be done.  Only one succeeds.


When George O'Connor writes about the Olympians he presents them to readers revealing their strengths and flaws.  His choice of which portion of their lives to direct his focus supports the qualities for which they are known.  Prior to meeting her father, O'Connor provides a vivid explanation for many of Artemis's requests.

In this particular volume the story of Artemis is told by her mother, Leto, Hera, Apollo, some handmaidens, Orion and Artemis.  Within the narrative O'Connor places dialogue.  This dialogue is in present day language lending realism to the story as well as humor.  Here are some sample passages.

I'll admit, I was not too wild about the idea of Leto and her brood moving to Olympus
Can you blame me?  My husband moves his two children by another woman into our house?
And brings the woman, as well?
I mean, really.

Zeus has just thrown out Otus and Ephialtes.

And stay out!
Yes, that'll show them, dear.

...almost made it that time...
Are you all right, my brother?
Of course!
You know Grandmother Earth has made it so the only thing that can kill us is each other.
And we'll never do that!
Bro hug!


The strength and skill of Artemis is adeptly portrayed on the front of the book case.  George O'Connor places her on one of her beloved mountains with hounds coming from the left and those lovesick Earth brothers coming from the right.  Beneath her outstretched legs is a stag, hunted and protected.  The choice of vibrant purple blue with golden yellow text, complementary colors, captures our attention.

On the left of the inside cover, opposite the title page, is a family tree of the Olympians.  For pacing and emphasis O'Connor, using luminous full color, alternates between double page, full page and pages with panels.  His panels are of varying sizes and combinations.  He adheres to a layout of squares and rectangles.

These panels may contain narrative or dialogue in separate shapes or no words at all.  In some of the panels we are shown a more panoramic view.  In others we may see a mouth, an eye or a portion of an object.  All align with the flow of the story as told by O'Connor.

One of my many favorite images is of Artemis running in the night through a forest corridor, trees lining either side.  The sky is deep blue and clear with a sliver of a moon.  Her hounds and Oceanides run behind her.  All are smiling with the joy in this freedom.  Artemis looks as if she is heading right toward us; perhaps off the page.  This panel is a quarter of a single page.


Without a doubt Artemis: Wild Goddess Of The Hunt written and illustrated by George O'Connor is going to be a favorite of readers of the Olympian series.  She has a hero quality hard to ignore with a life full of challenges and choices.  One of her final thoughts, as told to us by O'Connor, will resonate with readers of all ages long after the cover is closed.  At the conclusion there are pages devoted to Artemis, Leto, Orion and Atalanta, an author's note, G(r)eek Notes, discussion questions, a bibliography and recommended reading.  If you would like to read more about the first seven books, I was part of a blog tour for Ares: Bringer Of War.

To discover more about George O'Connor and his other work please visit his website by following the link attached to his name.  There is a separate website and blog for the Olympians.  At the website there are educators, activities and process sections.  At the publisher's website there are four pages of images you can view.  Enjoy the collected tweets below.

Going over some proofs of the next volume of OLYMPIANS--Artemis: Wild Goddess of the Hunt. pic.twitter.com/jm3jEWheU3
— George O'Connor (@GeorgetheMighty) July 26, 2016

These are my favorite two panels from Artemis: Wild Goddess of the Hunt, & you'll never know why until you read it. pic.twitter.com/rJm71yyNZs
— George O'Connor (@GeorgetheMighty) July 26, 2016

& I guess that wraps up my live-tweeting the proofs of Artemis. Thanks for reading! pic.twitter.com/znybj6DEqV
— George O'Connor (@GeorgetheMighty) July 26, 2016