No Time To Lose--Last Day On Mars Blog Tour

You are leaving the only home you have ever known.  It is the final day to do those things which are familiar or have been a temptation to you; skipping school, leaping off the sides of buildings due to loss of gravity, breakfast with your family, a game with your older sister, a ride with your parents in a Cosmic Cruiser to the research station and waiting and waiting to board the last ship to leave the planet.  Not only are you leaving the planet but the entire solar system. 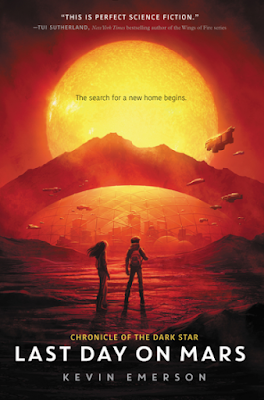 The sun which the planets revolved around for eons is consuming them, Earth is already gone. It's but a charred memory.  Last Day On Mars (Walden Pond Press, an imprint of HarperCollins Publishers, February 14, 2017) written by Kevin Emerson is an edge-of-your-seat science fiction thriller, the first in the Chronicle Of The Dark Star series.

Many hundreds of light-years from the solar system you call home, inside a spindly crystal structure floating at the edge of a great nebula shaped like an eye, a yellow light began to blink.

Good evening
As you all know, for the past four years we have been documenting extremely unusual activity in the sun.  Increased radiation and solar flares have wreaked havoc on daily life.  The best minds in the world have studied this data around the clock, and tonight I can report that while we still do not know the cause, our conclusion is unanimous:  the sun is expanding, and we are all in grave danger.

The great ships streaked away from the red planet like shooting stars.  One, ten, hundreds they went, their fusion rockets burning, solar sails unfurling, their hulls vibrating with millions of sighs of relief.

From the prelude and an introductory chapter we know there are other beings in the universe.  A chronologist has made a startling discovery and is murdered.  Before she dies, she is able to toss a tiny crystal sphere into a corner of her observatory.  Her observatory happens to be on Mars, the place where humans have been waiting and planning to travel to Aaru, a planet where they believe the human race can sustain life.  No one knows the chronologist had a base on Olympus Mons until the last day on Mars.

Thirteen-year-old Liam Saunders-Chang's older sister Mina and his classmate Shawn have already boarded the ship Scorpius.  Liam has to wait at the research station as his parents perform some final tests regarding terraforming.  His other classmate Phoebe is already there with her scientist parents.

In a day when nothing should go wrong, the first glitch is the departure time is accelerated due to a massive solar storm approaching faster than predicated.  Then Phoebe receives a call from her mother for her and Liam to manually open the surface air valves.  They think this will give them an opportunity to visit one of their favorite places.  They not only think, as they did yesterday when skipping school, but confirm something is on top of Olympus Mons, fading in and out of sight.  The last thing they think will happen is for the turbines at the station to explode.

In a sequence of rapid fire events Liam and Phoebe barely escape death over and over.  An entirely new method of travel is discovered, rescues are made, multiple enemies are thwarted, and hope hangs on a beacon Mina gave Liam as they hurtle into deep space.  Liam's mom's warning echoes in his mind as he carries a data key and a tiny crystal sphere with him.  In the final chapter a revelation will leave you breathless.


When you enter this world penned by Kevin Emerson it's as if you walk among the characters sharing experiences with them.  Through vivid descriptions of landscape, lifestyle, clothing, apparatus and methods of travel in space and time, we are acutely aware of the place in which we find ourselves.  When you open the pages of this book, your world grows hazy and this world comes sharply into focus.

The technique of a prelude, introductory paragraph, an interlude and an epilogue gives us knowledge of which the characters are unaware.  This heightens the tension we feel as each challenge unfolds.  The union of narrative and conversations between the characters is smooth.  Through their words and thoughts we identify with these characters feeling their stress, fear, overwhelming gratitude and laughter. Here are several passages.

But then there are those other times, aren't there?  Those rare moments when the stars twinkle just so, when the wind rustles the leaves just right, and you have that tingling sensation that even though the world is so very big, and you are only one infinitesimal part of it, you are also connected to something greater, somewhere out there beyond the moon and the black of space, something so grand...a pie crust even...

"Okay, that's not good," said Shawn.  "Backup power must have failed.  No dome means no artificial atmosphere, no radiation protection..."
"I thought there were like triple backup generators," said Liam.
"There are," said Shawn. "They've never failed before."
A hot wind from the Martian wastes strafed their faces with dust.  Liam's cheeks and hands started to prickle.  The dust was toxic to breathe.  Add to that the direct radiation with no dome or shelter to protect them...Any minute, their oxygen would be gone, and on top of that, Liam had heard the warning many times about what would happen to a human in normal Martian air pressure...something like all the water in your body evaporating, starting with your eyeballs.

"Sounds hopeless," said Liam.
"It can, but in a way, sometimes I feel like it might be the opposite.  There's so much that we don't know that we can only do the best we can, and that will have to be good enough.  Maybe that's what being human is really all about.  And sure, we may not know yet what dangers are out there, but we also don't know what good things we'll find."  She put her arm around him.
"We'll take it one unknown at a time.  Does that help?"
Liam nodded.  "Maybe?"
"My little Martian," said Mom.


Last Day On Mars (Chronicle Of The Dark Star) written by Kevin Emerson is impossible to put down once started.  When the line between science fiction and reality blurs, you have one great read.  I know middle grade readers (and others too) are going to read this as fast as they can turn the pages and count the days until the release of book two.

To gain a greater understanding of Kevin Emerson and his other work please visit his website by following the link attached to his name.  Follow this link to the publisher-created educator's guide. 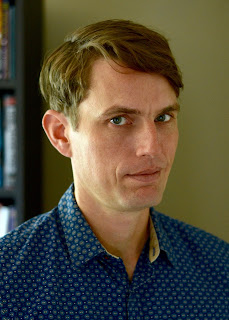 Kevin Emerson is the author of The Fellowship for Alien Detection as well as the Exile series, the Atlanteans series, the Oliver Nocturne series, and Carlos is Gonna Get It.  He is also an acclaimed musician who has recorded songs for both children and adults.  A former K-8 science teacher, Kevin lives with his family in Seattle.