A Day Etched In Memory

There are days we will never forget.  Their importance may be personal, professional or personal and professional.  Some of these significant happenings affect us as members of a neighborhood, community, state, country or even larger; on a global level.  We may not have been alive when the events left their mark on history but the impact remains.

I remember as vividly as if it were yesterday sitting in a seventh grade math classroom when the instruction was interrupted by the announcement that President John F. Kennedy had been assassinated.  The seconds of silence in the room before conversations began were deafening.  The details of this tragedy I understand are numerous.

Until reading James Swanson's Chasing Lincoln's Killer (Scholastic, 2009) what I knew of President Abraham Lincoln's assassination was confined to facts from history textbooks.  Adding to my realization of what happened by providing a more concentrated, visual presentation is the newest title in Don Brown's Actual Times series, He Has Shot The President!: April 14, 1865: The Day John Wilkes Booth Killed President Lincoln (Roaring Brook Press).  By beginning his focus on the differing beliefs of the two men, Don Brown creates a scenario filled with tension.

President Lincoln had cause to feel good; the war with the Confederacy was drawing to a close. His accomplishments in that conflict and bringing freedom to the slaves were monumental.  John Wilkes Booth felt very differently.  He saw President Lincoln as a destroyer of all he held dear.

The President and his wife planned to attend a play at Ford's Theater in the evening.  John Wilkes Booth heard this mentioned when he, an actor of some renown, was at the theater that day.  For quite some time Booth and a group of people, who championed similar positions as him, had planned to kidnap President Lincoln.  With the loss of the war, kidnapping changed to murder.  That evening was the perfect opportunity.

Specific plans were put into place by Booth and his companions; an escalation of those to be killed, making sure all was in place at the president's box and the escape. Harry Ford, theater owner, was also getting the special box ready for the president's visit.  Booth's arrival and subsequent actions are carefully chronicled until he left the premises after shooting President Lincoln.

In another part of the city, Lewis Powell, attempted to carry out his murderous intentions against Secretary of State William Seward.  George Atzerodt lost his sobriety at the hotel bar; Vice President Andrew Johnson was thus unharmed. Under doctors' care with soldiers' assistance the President was removed from the theater to Petersen House across the street as John Wilkes Booth rode away from the city on his horse.  Per the scheme he met with David Herold, his would be guide to safety in the South. (Herold ran from the scene of William Seward's attempted murder.)

From Lincoln's bed with the gathered crowd to Dr. Samuel Mudd's home where Booth and Herold stopped to seek help for Booth's injury to the woods where they waited to cross the Potomac and back to Washington, D. C. where tempers boiled over and the manhunt for Booth and his conspirators expanded, the action never lessened.  Abraham Lincoln's body journeyed the miles from the capital city to Springfield.  A botched river crossing, a successful fording of another river, finding refuge with an unsuspecting family and riding cavalrymen, sealed the fate of the two fleeing justice for their deeds.

From page one this recounting of those historical facts is solidly captivating.  Don Brown creates a flowing blend of narration, explicit details and quotes making the reader feel as though this might have happened yesterday not nearly one hundred fifty years ago.  We know what happened on April 14, 1865 and after but Brown gives us different perspectives.  He takes us into the theater box, the bedroom of Petersen House, the Potomac River, the streets of Washington, D. C., the tobacco shed at Garrett's farm and the Booth family plot in Maryland.  Unless you are a scholar, as surely Brown must be, you will leave the reading of this book knowing at least one new piece of information.  Here is an example of his writing.

He led them to a small boat on the Potomac River and gave them directions to a creek in Virginia on the opposite shore.
"Mrs. Quesenberry lives near the mouth of this creek.  If you tell her you come from me I think she will take care of you," Jones said, pushing the boat into the current of the black river.
But the dark water and moonless night proved too unsettling for Booth, and even using the compass he carried, they veered off course.


Using a muted color palette of blue, gray, brown, purple, some green and black, Don Brown expertly depicts the mood surrounding this date with his watercolor paintings.  The formal title page, on the right, is a representation of the dust jacket and book case done in black and white like a newspaper with Booth on the left page, gun in hand, looking out at the reader proclaiming,

I do not repent the blow I struck.

A single page and double page illustration introduce the book.

Throughout pictures are altered in size to compliment the information contained in the text.  Opposite the explanation of Booth's gang are pictures of four members standing together with their names beneath them.  Two pages are devoted to the street outside the theater as President Lincoln, his wife, Major Henry Rathbone and Carla Harris arrive.  It is a calm, normal scene in sharp contrast to the next two smaller visuals showing a bird's eye view of buildings and Booth sneaking up to the President's theater box. John Wilkes Booth standing behind the President and his wife just before the shooting is haunting and chilling.  Several other illustrations afford readers to view the happenings honestly; Brown not avoiding the grave nature.


Written and illustrated by Don Brown, He Has Shot The President!: April 14, 1865: The Day John Wilkes Booth Killed President Lincoln is a definite must read for older readers.  With a book length of sixty-four pages it supplies a gripping timeline with crisp clear writing and convincing illustrations.  Don Brown has a gift for breathing life into history.

Please follow the link to his official website embedded in his name.  This link to the publisher's website gives you a glimpse at several illustrations from the book. Other titles in the series are:
Let It Begin Here!: April 19, 1775: The Day The American Revolution Began; All Stations! Distress!: April 15, 1912: The Day The Titanic Sank; Gold! Gold From The American River!: January 24, 1818: The Day The Gold Rush Began; and America Is Under Attack: September 11, 2001: The Day The Towers Fell.

This is another fantastic Wednesday participating in the 2014 Nonfiction Picture Book Challenge hosted by Alyson Beecher at Kid Lit Frenzy. 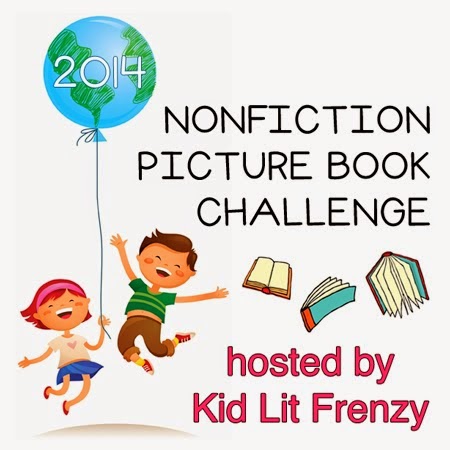