If you want to have a complete sensory experience, consider a canine companion.  Their heightened abilities will alert you to something long before it registers in your ears, eyes, or nose or before you venture to taste or touch it.  Dogs walk through their surroundings ready to react.  You learn to observe their every look, twitch of their nose, or swivel of their head.  When they stop, you need to stop. 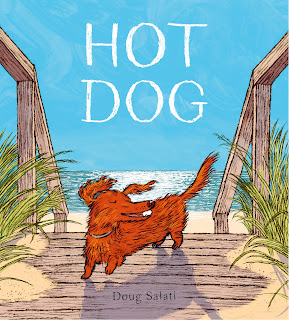 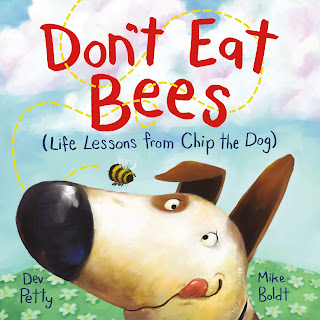 I am a smart dog.
I am only 7, but that is practically
50 in person years, so I already know
several important dog things.
To begin, Chip relays his opinions on cats and litter boxes, burying bones, and the unbelievable array of dog sizes and shapes.  He then shifts to his most favorite thing in the world, eating.  He loves chewing socks, but advises to avoid bees.
Paper, especially homework by his younger human, is one of his delectable delights.  It keeps them with him longer when they have to redo their work.  He also loves the Thanksgiving turkey. (Or is it the chase?) At all costs, he reminds us to avoid bees.
Grandpa's teeth are tasty.  So is the cat's food.  In fact, there is not much that Chip won't consume, except for bees and a couple of other yucky things, like fire.
By now you might be wondering why Chip is so persistent about not eating bees.  It is a secret secret which this writer will not reveal.  And of course, the cat is seeking revenge for the loss of its food as the comedic conclusion unfolds.  Oh, Chip!
Told from Chip's point of view, this story penned by Dev Petty is laugh-out-loud funny from beginning to the end.  Chip's initial claim of being smart followed by his commentary and logic is a constant cause of giggles and grins.  Dev Petty's use of do and don't and a pro tip create a rhythm as the narrative is read.  It invites us to keep turning the pages, so we can keep laughing.  Here is a passage.
Do: Eat the cat food.
Just because you can.
Who's a dumb dog
now, Mittens?
Not me.
I don't eat bees.
How can you look at the front, right side, of the open and matching dust jacket and book case without laughing?  Wide-eyed Chip who loves to eat everything is seriously thinking about gulping down the bee buzzing around him.  The dotted yellow line indicating the path of the bee appears whenever Chip mentions not to eat bees.
On the back, to the left of the spine, on a turquoise canvas is a retro menu of
Chip's
DINER
Since 7 Years Ago
Under the headings of appetizers, entrees, and dessert are listed those items Chip mentions loving to eat in the story.  Paw prints appear on the menu and as part of the menu heading.  In true Chip fashion, the lower, left-hand corner of the menu has been bitten off.  The ISBN is part of the menu.
Above a flower-covered field along the bottom of the opening and closing endpapers is a wide blue sky dotted with fluffy clouds.  The clouds are not the same on each set of endpapers.  In a different path on each set of endpapers is the yellow dotted line of a bee's path.  This path continues on the verso and title pages.  Chip, on the left, eyes the bee with extreme caution as it flies toward a flower on the right.
These lively, humorous pictures by Mike Boldt are placed on a variety of backgrounds and make excellent use of white space.  Most are single-page pictures, but for dramatic effect (and maximum hilarity), there are five double-page pictures.  The facial expressions, the eyes, and body postures like Chip's pointing paw add to the comedy.
The placement of Chip on the page and his size in the scene further contribute to the fun and funniness of this book.  When Chip is speaking about Mitten and the litter box, all we see of Chip is the upper part of his head along the bottom of the page, looking up as the cat walks away from the smelly box.  When Chip is running away with the Thanksgiving turkey, we are privy to the entire chaotic event of the table tipping, chairs falling, dishes crashing to the floor, and adult arms reaching toward Chip as he scampers away on the right of this two-page image.
One of my many favorite illustrations is a single-page picture on a bright yellow canvas.  Chip is front and center with a tilted head.  He is wearing a goofy grin exaggerated by the presence of Grandpa's false teeth.  We see Chip's head and a small portion of his upper body.  Around him, laughing are the daughter, Grandpa, and the mother.  The daughter is hugging her stomach.  Grandpa is crying, he is laughing so hard.  And the mother is holding her phone, either because she has taken a picture or will take one soon.  Chip's eyes are crossed.
Whether you are a dog person or not, everyone loves to laugh.  This book, Don't Eat Bees (Life Lessons from Chip the Dog) written by Dev Petty with illustrations by Mike Boldt is so funny, you know parts or all of it are probably true. (I don't dare take my dog anywhere a bee might be.  As we take our morning walks, if a bug comes near her she snaps it right out of the air and swallows it.)  You'll want to add this title to your personal and professional collections to hear the sound of laughter ringing out as you read it.
To learn more about Dev Petty and Mike Boldt and their other work, including their previous collaborations, please follow the link attached to their names to access their websites.  Dev Petty has accounts on Instagram and Twitter.  Mike Boldt has accounts on Instagram, Twitter, Vimeo, and YouTube.  At the publisher's website, you can view interior images.  John Schu interviews both Dev Petty and Mike Boldt about this book on his blog, Watch. Connect. Read.  Dev Petty stops by author Tara Lazar's blog, Writing for Kids (While Raising Them), to chat about writing this book.
UPDATE:  Dev Petty is a guest author at the Nerdy Book Club, July 12, 2022, in a post titled The Space Between: Why Humor Matters in the Dark.  This title is part of the discussion.
Posted by Xena's Mom at 9:01 PM