Equal Under The Law

There was a time in schools and colleges when girls and young women did not participate in varsity or intercollegiate sports.  For most of us there was only the Girls Athletic Association and intermural athletics.  In educational institutions, girls and young women were blatantly denied equality.  In fact, there was a rise in feminism in the 1960s and 1970s as women on a larger scale sought equality in all aspects of their lives.
Fortunately, opportunities for women have improved in the United States of America.  This is due to a law signed on June 23, 1972.  An Equal Shot: How the Law Title IX Changed America (Christy Ottaviano Books, Henry Holt and Company, February 23, 2021) written by Helaine Becker with illustrations by Dow Phumiruk chronicles the obstacles faced by girls and women and how this congressional legislation removed roadblocks based on gender. 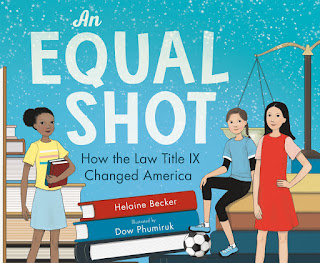 It takes just three words to say, "It isn't fair."
If you count four words, they will form a willingness to champion equality for women of all ages.  When you count thirty-seven words, you have words which alter women's rights for generations.  These thirty-seven words are a part of American history for the past forty-nine years. Only 49 years.
They are not a part of any of the documents written by the first leaders of this country.  They are not a part of any political speeches during the Civil War.  They are a federal law called Title IX.
Before Title IX is gender discrimination.  You were fired if found to be pregnant or married.  Sometimes, you were denied admittance in studies for certain professional occupations.  With Title IX, there is a sizeable shift in balance.
Title IX did open new doors for women, but it did so for men as well.  Men were able to pursue careers normally considered for women alone.  In the final sentences of this book, we are reminded of the power of words to promote change for the benefit of everyone.  We are asked a single, thought-provoking question.
The presentation of this momentous law is unique by author Helaine Becker.  She focuses on the potential built on words, written or spoken, beginning and ending this narrative with their triumphs.  Through declarative, descriptive sentences, she draws our attention to the lack of equality in our defining democratic documents and contrasts them with the accomplishments afforded everyone in the Title IX law. Here is a passage.
Girls could even be prevented from becoming
doctors, professors, or scientists.
Simply for being girls.
A vibrant, sky blue, textured with speckles, supplies the canvas for a double-page image on the open and matching dust jacket and book case.  Title IX refers specifically to educational institutions receiving federal funding.  For this reason, artist Dow Phumiruk places large books stacked vertically and horizontally left to right across this image.  The spine is designed to be the open edge of a book.  On and among these books are girls and young women participating in different sports and attending classes.  On the right you can see the scales of justice level.  The girls and young women on the dust jacket as well as the title text are varnished.
On a background of muted grass green is a pattern of girls and women participating in sports on the opening endpapers.  These same girls and women appear on the closing endpapers on a background of pale blue. There are thirty-two different active images.
These illustrations rendered
in Adobe Photoshop with scans of watercolors and textures
span two pages.  Within those two pages are differing perspectives, smaller vignettes, layered items and symbolic backgrounds.  Three girls, young women, we see on the first picture, travel through most of the following pages.  This invites us to join them.
Most readers will see themselves reflected in the characters Dow Phumiruk portrays.  She carefully showcases a diverse collection of girls and women. They are animated in her signature style.
One of my many, many favorite illustrations brings us into a pastoral scene.  It is filled with a grassy meadow and full, green-leaved trees on the left and right sides.  On the left portion is a large stone monument for IX with a roof and a base.  In the peak of the roof is the word Title.  The shape of this mirrors that of the United States Supreme Court building.  In the upper "v" of the "x" is a nest with two white doves in it.  Vines are stretching up from the base.  On the left side, girls and young women are making their way to the scale hanging from the beam balanced on either side of the center of the roof peak.  One is climbing a ladder.  Another two are using a rope.  On the right side five boys are standing in that scale.  Girl by girl the scales are becoming balanced.
This book, An Equal Shot: How the Law Title IX Changed America written by Helaine Becker with artwork by Dow Phumiruk, is one you will want to have in your personal and professional collections.  There is extensive backmatter with illustrations.  Two pages are dedicated to Title IX and You supplying formation about Patsy Mink, Bernice Sandler, Edith Green, and Shirley Chisholm.  The next two pages have extended facts about What the Law Did, Title IX Today, Progress, More Work to Do, and Further Exploration.
To learn more about Helaine Becker and Dow Phumiruk and their other work, please visit their websites by following the link attached to their names.  Helaine Becker has accounts on Facebook, Instagram, and Twitter.  Dow Phumiruk has accounts on Facebook, Instagram, and Twitter.  At the Macmillan website, you can view interior illustrations.
UPDATE:  Please take a few moments to read the interview with Helaine Becker and Dow Phumiruk hosted by Elizabeth Bird, Collection Development Manager of the Evanston Public Library system, at School Library Journal, A Fuse #8 Production.  It is fabulous!
Posted by Xena's Mom at 5:39 PM