As an educator who has experienced loss of a beloved being, you are always filled with compassion when a student comes to you expressing sadness at the death of a family member, a cherished animal, or friend.  You cannot know the exact nature of their grief, but you understand it based on your personal heartbreaks.  You listen.  You offer support.  If asked, you can share when deep sadness has touched your life.

As a librarian, you know which titles can offer the best comfort for each child. Addy's Cup Of Sugar: Based on a Buddhist Story of Healing (Scholastic Press, October 20, 2020) written and illustrated by Jon J Muth is a book for those mourning and missing a special individual.  It's an explanation of how death, as a part of life, connects us. 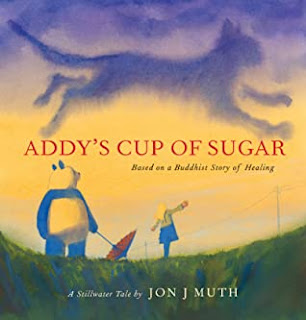 Addy and her pet kitten were best friends.
They did everything together.
She called him Trumpet because of his meow.  They woke up together.  Neither started their day without the other.
Abruptly, this changed one day.  Addy and her family recently moved.  Trumpet died when a car hit the kitten near their new home.  Addy was heartbroken.  She wanted Trumpet back.  She knew her friend Stillwater, a panda, could help her.
Stillwater, saddened for Addy, offered sympathy and a solution, a medicine.  One of the necessary ingredients was a cup of sugar.  It had to be borrowed from someone untouched by death.  Addy ran to the closest house to borrow a cup of sugar.
There a little girl assured her they had sugar, but her grandfather died the previous week.  From house to house Addy ran, but no one was untouched by death.  Taking a break Addy recalled an antic Trumpet performed.  She told Trumpet she was working as hard as she could to bring him back.  Addy kept remembering and then her mind and heart and the end of the day worked its magic.  In his wisdom, Stillwater knew the medicine Addy needed.
With his words, author Jon J Muth establishes the close bond between Addy and her kitten Trumpet.  He speaks with a heart that knows the strength of affection between humans and animals.  With respect for his readers, he does not sugarcoat the kitten's death, stating it briefly and with truth. His blend of text and dialogue gives his signature interpretation of this Buddhist teaching the capacity for comprehension by his intended audience.  Here is a passage.
Addy ran through the backyards
and beneath the laundry that hung
on clotheslines.  The linen sheets that
brushed against her skin felt like
Trumpet's rough tongue.
She never knew what a cat's
tongue felt like until she met
Trumpet.
On the front, right, of the matching dust jacket and book case, using shades of complementary golden yellow and rich purple, Jon J Muth casts a comforting spell on readers.  We know Trumpet is a shadow of his former self here.  Stillwater, giver of knowledge, stands next to Addy as she embraces the sad reality of her loss.  This image extends to the left edge of the spine.
On the other side of the spine we are shown a portion of a double-page interior illustration.  It is the picture enhancing the text above noted.  On the top part Addy is running across grass along the side of hanging sheets on a clothesline.  Beneath the grass, on the lower half, Trumpet, enlarged, is running with her.  The kitten appears to be sketched in charcoal chalk.
The opening and closing endpapers are covered in the palest of robin's egg blue.  It's nearly white.  On the title page, Trumpet, seated, looks kindly at readers.  A tin measuring cup is placed to the right of Trumpet.  Stillwater's red umbrella hangs on the verso page.  On the dedication page Stillwater, lounging on the grass, is playing with Trumpet.
These images by Jon J Muth were rendered using
watercolor and pencil on d'Arches paper.
They are single-page pictures framed in white, or dramatic double-page pictures, page edge to page edge.  Conveying a soft gentleness, they invite readers into the story.  We view each visual with different perspectives; some close to Addy and others as if we are standing back from her.
One of my many, many favorite illustrations is the first one.  It is a single-page picture.  Addy is squatting on a large boulder, her light brown/blond hair in a braided pigtail down the center of her striped shirt.  Her hands are outstretched and reaching down to Trumpet.  Trumpet is perched on a much smaller boulder, a large rock.  This rock and Addy's boulder are in water with many smaller rocks around them.  Their reflections in the still pool are beautiful.  The light and shadows indicate a sunny afternoon with the slightest hint of light blue wash around the kitten and child.  It is a poignant portrait of shared love.
Addy's Cup Of Sugar: Based on a Buddhist Story of Healing written and illustrated by Jon J Muth is an important book allowing all of us to see how death is inevitable and a part of life.  This book helps us to bear the sadness because we are not alone in this grief.  At the close of the book Jon J Muth, in an Author's Note, talks about the Buddhist legend and his views on life and death.  I highly recommend this book for your personal and professional collections.
I could not locate any website or social media connections for Jon J Muth but I did locate an article here and an interview here in American Libraries.  At the publisher's website you can view excerpts from the book.  This includes the title page.
Posted by Xena's Mom at 2:24 PM