One Voice For The River Of Grass

More than six decades ago, I traveled to southern Florida for the first time with my parents and sister.  At five years old it seemed as if I had set foot on a different continent rather than a state 1,400 miles away from my home located in Michigan.  There were lush palm trees, wide sandy beaches and the vast ocean.  It seemed as if there were hibiscus in striking shades of pink and red growing on bushes everywhere. One of the most remarkable memories is a visit we took to Parrot Jungle. (Parrot Jungle has since been closed.) With my arms held out perpendicular to my body, colorful parrots rested there, using them like tree branches.  On the top of my head sat a polite cockatoo.

My memories of this childhood visit are wonderful but only memories.  Long before my trip another girl was fascinated by what she experienced in a stop with her parents in southern Florida.  But, unlike me, this singular individual came back and dedicated her entire life to protecting a portion of its natural beauty.  Marjory Saves the Everglades: The Story of Marjory Stoneman Douglas (A Paula Wiseman Book, Simon & Schuster Books for Young Readers, September 22, 2020) written by Sandra Neil Wallace with illustrations by Rebecca Gibbon acquaints us with a woman who believed we need to act in light of what we know.  She stood strong to support that which was unable to do so for itself. 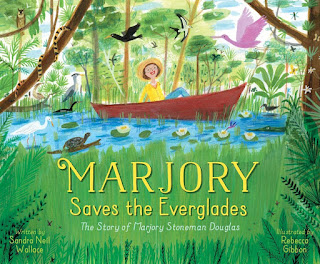