There are people who would much rather be in or on water than any other place.  Depending on the nearness of their homes to water and the seasons of the year, if there is an opportunity to enjoy water, they will take it.  When they are swimming, diving, kayaking, canoeing, paddleboarding, fishing, or sailing, they become one with the water and its inhabitants.  Many times, these activities are done in solitude or with a partner.  There is little spoken conversation, but there is an almost inexplicable bonding between an individual and water or between individuals and each other and their shared experiences in or on water. 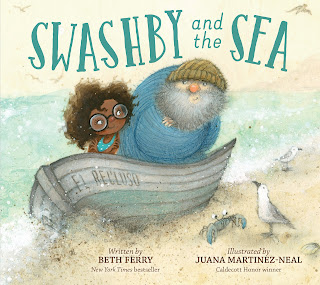 There was once a man, a seaman, who had such a relationship with water. He knew water was to be treated with the utmost respect for its vital function in the continuation of all life.  He, like others who chose to observe, knew water revealed life lessons in unexpected ways.  Swashby and the Sea (Houghton Mifflin Harcourt, May 5, 2020) written by Beth Ferry with illustrations by Juana Martinez-Neal is a story of interrupted solitude, intervention by a close companion and the surprising results.

She, the sea, had spent many years with Captain Swashby.  She knew him better than he knew himself.  For his retirement, Captain Swashby settled in a small home on the edge of the sea.  With the sea at his side, he lacked for nothing.  He loved the silence.

All was well until the intrusion.  To Captain Swashby's dismay, a little girl and her grandmother settled in the vacant home next door.  It was no longer quiet.  Their beach gear was scattered across the sand.  Captain Swashby did not want neighbors.  He left them a message written in the sand.  The sea went to work.  The remaining letters spelled SING.

This word was the only invitation the little girl needed.  She sang and sang and sang.  She asked Captain Swashby what he wanted her to do next.  His unfriendly reply written in the sand was again altered.  When the little girl, with her granny nearby, attempted to do as he (the sea) requested, Captain Swashby clarified how to correctly make a starfish wish.  Their invitation for tea was spurned and a third message was left on the beach.

Each time he wrote a message, the sea erased some of the letters.  When the young neighbor attempted to respond, Captain Swashby couldn't stop pointing out the correct way to complete a task.  He approached and grumpily retreated, like waves washing on the beach.

Finally, the sea intervened in a manner not to be ignored.  Without thinking, Captain Swashby acted.  For the little girl, her granny and Captain Swashby, their lives by the sea shifted and the sea was satisfied.


When Beth Ferry presents Captain Swashby to readers, she does so with the use of alliteration and repetition. (This continues throughout the narrative, also.)  It's a gentle cadence, perfectly suited to the shock this seaman is about to receive.  Comedy is introduced in the contrast between this man who prefers seclusion to the togetherness offered by his new neighbors.

Having the sea act as a bridge between the two by washing away letters from his demands is a superb technique.  It's a subtle reminder of how friends can assist us in forming new, perhaps lasting, connections.  Here is a passage.

Swashby battened down the hatches,
hid when the doorbell rang, and fed their
oatmeal cookies to the gulls.
He didn't need neighbors.
He didn't want neighbors.
Neighbors were nosy,
a nuisance,
annoying.


You can almost feel the mist of sea spray and taste the salt in the air when you look at the open dust jacket.  The scene extends flap edge to flap edge.  On the left, back, flap edge sea glass, a wide-eyed blue crab and a baby seagull are placed around the descriptive text about Beth Ferry and Juana Martinez-Neal.  The sea shown behind the little girl and Captain Swashby on the front travels over the spine and across the entire back portion.  A yellow pail floats in the water in the upper, left-hand area of the sea.  The little girl and Captain Swashby on the front are carefully appraising each other, hints of smiles on both of their faces.  On the front flap a seagull holds a starfish in its beak near another yellow pail.

On the book case, now resting higher and surrounded by sand is Swashby's boat.  It spans from back to front, left to right.  The lower portion of the boat bleeds off the bottom edge.  A seagull is perched on the stern.  A blue crab is resting on the bow.  The title is written in the sand on the right, above the boat.  Beth Ferry's and Juana Martinez-Neal's names are on the front of the boat.

Two tight and unfolding swirls of shades of turquoise cover the opening and closing endpapers, like waves.  On the title page, with his back to us, Swashby is painting a number on his boat.  Items from the sea, a piece of driftwood, seaweed, a starfish, and a curious crab are on the sand.  A yellow pail is next to the boat.

These illustrations by Juana Martinez-Neal rendered

in acrylics, colored pencils, and graphite on hand-textured paper

are double-page pictures replete with delicate details and charm.  Juana Martinez-Neal combines soft textures with bolder colors to place emphasis on those elements which enhance the narrative.  This is seen in the initial distinction between Swashby and the little girl and her granny. It's apparent in the stuffed toy cat left sitting on the edge of Swashby's boat as the little girl walks on his dock.  A conch shells is placed near the little girl as she sings.  Sailboats pattern the fabric of the chair Swashby sits in on his porch.  And Swashby's heart tattoo labeled El Ma . . . declares his true love.

The wide, circular glasses on the little girl, the bushy eyebrows and full beard on Swashby and the beaded jewelry worn by Granny are signature characteristics endearing readers to each of them.  As Juana Martinez-Neal depicts the abandon the little girl displays with everything she does, Swashby's determination at avoidance, but also his desire at perfection, and Granny's steady generosity, our knowledge of them grows.  They may not know it, but we watch through Juana Martinez-Neal's artwork as the sea becomes the center around which their lives revolve and intertwine.

One of my many, many favorite illustrations is when the sea washes away the letters in Captain Swashby's first message leaving SING.  Gently curving toward the sea through the sand is the wooden deck, moving from the foreground on the right, crossing the gutter and ending before the letters and water on the left.  Seaweed is scattered on the sand, as well as several seashells.  On the right, close to readers is the little girl.  Her right foot is on the deck and her left foot is kicked up in the air.  Her left arm and hand are extended up in joy.  In her right hand she carries a yellow pail.  Her eyes are closed behind her glasses.  Her mouth is open as she sings.  Her soft hair frames her face like a cloud.  In a word, this is bliss.


The longer you are out-of-doors, the more you realize it influences you; sometimes in ways you find extraordinary.  Swashby and the Sea written by Beth Ferry with illustrations by Juana Martinez-Neal is a story of wise waves, and the forming of unlikely friendships.  It is a story of song, sand, seagulls, and starfish wrapped in teatime on towels.  This book is a storytime treasure, meant to be shared. Children will love the rhythm of the words and so will the adults who read them.  I highly recommend this for your personal and professional collections.