Taking The Lead With Heart

There are books you hold in your hands and the story within their pages somehow reaches out to you immediately.  In this instance you are not abiding by the age-old proverb.  The cover is an open invitation and you accept it eagerly. 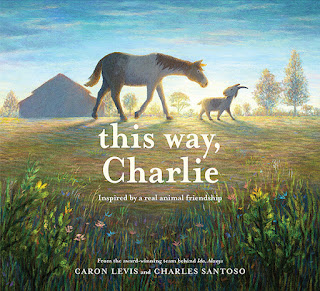 Is it the image on the dust jacket which holds your attention?  Does the author's name trigger a memory of another well-loved book they wrote?  Are you fond of the artwork of the illustrator?  With respect to this way, Charlie: Inspired by a real animal friendship (Abrams Books for Young Readers, April 21, 2020) written by Carol Levis with illustrations by Charles Santoso, it is a beautiful blend of all three.  This title is guaranteed to find a place, a forever place, in your reader's heart.

Jack, a resident goat, knew some of the new arrivals would linger longer than others.  Some, like him, would spend the remainder of their lives on Open Bud Ranch.  Regardless of the outcome of any of these animals, Jack would keep his distance.  That was his way.  Charlie, a horse and a new arrival, did not keep himself separate from Jack.  This angered Jack.

Antonia, a human caretaker, on the ranch explained what Jack noticed.  Charlie was blind in one eye.  She could not heal his blindness.  Jack decided to watch Charlie.  One thing about Charlie caused him to wonder.  And one morning, Jack did an un-Jack like thing.  He said

One goat dweller leads another horse dweller to his favorite field, sharing the delicious goodness and the warmth of the sun.  The next day Jack led Charlie to another favorite part of the ranch.  One day changed into another day, until Jack was guiding Charlie every day.  The new friends would exchange questions and answers.  The new friends cared for each other, helping them to overcome fears, some deeply hidden in their minds and hearts.

One morning, Jack became upset with Charlie's happy-go-lucky outlook and well-used phrase.  They were both so shocked at his outburst, they didn't see an approaching storm.  Frightening danger quickly turned into a disaster.  Jack knew there was something he had to do for his Charlie.  That's what friends do.  The result of Jack's actions is nothing anyone could have predicted after his first meeting with Charlie.  It is better, much better, actually better than the best.


Several times during the reading of this narrative penned by Caron Levis, readers will pause, overwhelmed by waves of emotion. The poetic portrayals of specific moments are breathtaking.  The repetition of key phrases by Jack and Charlie not only connect them as friends but link them to readers through the rhythm of their story.  With her words, Caron Levis discovers the extraordinary in the everyday.  Here is a passage.

Jack noticed Charlie's eye had a soft glow---
like the moon,
which often guided Jack when he felt lost in the dark.

He wondered what Charlie used for a moon.


You know as soon as you see the open dust jacket, revealing the front and the back, this is an exceptional book.  The color palette used for the pastoral landscape and the brush strokes in the sky, trees, grass and flowers fashion a soft Monet-like texture.  On the front Jack, Charlie and the larger title text are varnished.

To the left, on the back, the scene from the front continues over the spine to the far left.  Branches from a large tree stretch from the left edge, leafy boughs bleeding off the top.  A smaller barn is placed in the upper, right portion of this back image.  As on the front sunlight casts a golden glow.

On the front of the book case a lost-looking Charlie stands in an evening without stars.  He is looking to the left.  On the left, coming from the spine, in a bit brighter light, Jack is looking back at an emerging Charlie, encouraging him forward.  Charlie is hesitant.  In a second image toward a brighter light Charlie is following Jack as they both look ahead.

The opening and closing endpapers are a robin's egg blue.  On the title page two green leaves drift between clouds in a sunny sky.  On the verso and dedication pages readers are given a double-page picture of a truck bringing Charlie to the ranch.  It is a calm scene full of hope and promise.  The two leaves float over the entrance to the ranch.  On the verso page this sentence says much about Charles Santoso and his work for this book.

The illustrations for this book were made with digital brushes and love.

To enhance the text the size of the illustrations vary from double-page visuals, with larger perspectives and much closer points of view, to single-page pictures, clusters of smaller illustrations, loosely-framed horizontal pictures on a double-page picture, and vertical panels across two pages.  Each page turn represents Charles Santoso's skill in accentuating the magic found in certain moments.  To focus on drama in one portion of the book, circle illustrations are inserted in larger pictures.  The details in each picture are striking and captivating.

One of my many, many favorite illustrations spans two pages including three different images.  On the left a smaller Jack watches a smaller Charlie as he walks around trying to navigate an area with one good eye.  He staggers a bit and circles around and around.  On either side of the gutter is a portion of Charlie's face close to us.  On the left is his face with his good eye.  On the right is his face with his blind eye.  This part of his face is placed on a night setting.  To the right, Jack is standing in a field backed by trees and shrubs.  He is looking at the full moon overhead.  This is the picture for the text already noted.


In a word, this book, this way, Charlie: Inspired by a real animal friendship written by Caron Levis with illustrations by Charles Santoso, is love.  It's about an affection between two animals, each with something broken in them, who heal through their friendship.  In an Author's Note Caron Levis talks about the real Jack and Charlie, her research and other animal friendships and human and animal relationships she knows.  I highly recommend this title for both your personal and professional collections.

To learn more about Caron Levis and Charles Santoso and their other work, please visit their respective websites by following the links attached to their names.  Caron Levis has additional resources for this title on her website.  Caron Levis has accounts on Facebook, Instagram and Twitter.  Charles Santoso has accounts on Facebook, Instagram and Twitter. At the publisher's website you can view interior images.  This title and Caron Levis and Charles Santoso are featured on KidLit TV for the cover reveal and for a read aloud by Caron Levis.  There is also another video, StoryMakers, where Caron Levis talks with Rocco Staino about this book.  It is featured on the read aloud page.
Posted by Xena's Mom at 7:01 PM