Those adults who most influence our lives as children can be our parents, grandparents, extended family, an educator, a neighbor or a stranger.  There will be a statement they make, sometimes more than once, or a single act they complete which will resonate in our minds for the rest of our lives.  At the time we might not be aware of their effect on us, but those words or that deed or gesture will come into our minds when we need it the most. 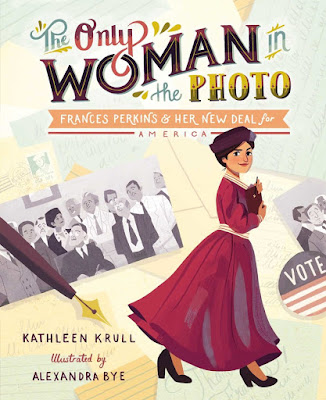 During his tenure, March 4, 1933 to April 12, 1945, as president of the United States Franklin Delano Roosevelt appointed the first woman to a position as a cabinet member.  She faithfully served in that capacity during his presidency.  The Only Woman in the Photo: Frances Perkins & Her New Deal for America (Atheneum Books for Young Readers, February 4, 2020) written by Kathleen Krull with illustrations by Alexandra Bye adeptly presents her life and service to her ideals and her country.

Little Frances Perkins was shy.  She couldn't speak up even when asking for a book at the library or a spool of thread at the store in her cozy New England town.

Heeding the words of her grandmother, who she felt a kinship, Frances let nothing stand in her way to doing her best.  Frances's younger self observed people and their treatment by others and society.  Through the support of her father, believing in equality in education for women, Frances ruled the debate stage in high school.  A requirement by an astute college professor propelled Frances to do more for those stuck in circumstances not of their making.

Rather than seeking a spouse as many women did, Frances entered the field of social work.  She was a fierce advocate for women's right to vote.  She pointed out unhealthy working conditions and the lack of fire safety in numerous workplaces.  She was devastated and furious about the loss of life in The Triangle Shirtwaist Factory fire.  Theodore Roosevelt recognized the work of Frances and she became the head of a city committee on workplace safety.

How was Frances able to head a committee comprised of men?  She studied them, their actions and reactions.  She built a bridge.  She was soon heading the commission for regulations in the workplace for the entire state of New York.  This was a platform she needed to succeed in her desires.  In 1929 Franklin D. Roosevelt, then governor of New York, gave her a new position.  The stock market crash that year prompted Frances to even greater levels, speaking out against President Herbert Hoover.

At fifty-two years old, Frances Perkins became a member of FDR's cabinet in 1933 as his Secretary of Labor.  She took this position with a list given to FDR of what she wanted to achieve.  Working together the New Deal became a reality.  Two years later the Social Security Act was law.  Her vision and his foresight and power helped Americans live better than they had previously.  Her legacy continues to this day.


The true value of Frances Perkins and her life's work is revealed in the research and words of Kathleen Krull.  She closes her narrative the way she begins it, using a similar choice of words but these words allow her to showcase the talents and triumphs of Frances Perkins.  The insertion of quotations by Frances Perkins and her grandmother supply readers with a personal look at her youth and adult experiences.  Specific examples add depth to the presentation.  Here is a passage.

Against her parents' wishes---they preferred she start husband hunting---she moved to New York City and began working.  A new way to help fight injustice, called social work, was flourishing there.

"I had to do SOMETHING about the UNNECESSARY hazards to life,
UNNECESSARY POVERTY.
It was sort of UP TO ME."

She started off delivering milk and food to starving children, getting landlords to give a break to those unable to pay their rent, and asking for donations.  In dangerous neighborhoods, she defended herself with the tip of her umbrella.

To the left, on the back, of the jacket and book case a quote by Frances Perkins is placed in the center of a collage of photographs.  It reads:

"The door might
not be opened to
a WOMAN again for
a long, long time.
And I had a kind of a
DUTY to walk in &
sit down in the chair
that was offered."

On the opening and closing endpapers illustrator Alexandra Bye features the changes that occurred during Frances Perkins' life.  On the first set in two tones of blue are the faces of many men with Frances, in shades of brown, positioned among them in the upper, right-hand corner.  On the second set of endpapers are a collection of women, more modern-day, with Frances, again inserted in the upper, right-hand corner.  The women are shown in the same color as Frances was on the opening endpapers.  She is in a lighter and brighter color on this second set.

These digitally rendered images, in full color, place Frances Perkins in a historical perspective with the clothing worn, architecture and means of transportation supplied.  All her quotations are enlarged and colorfully displayed in a flourish of various fonts.  To complement the text the sizes of the pictures vary from single-page pictures to double-page visuals with smaller circular insets on some of the pages.

One of the more dramatic scenes is Frances Perkins rushing to the site of The Triangle Shirtwaist Factory fire, skirts held in her hands so she can run.  Her skirt drapes back over the gutter to the left where on a white space a spilled cup of tea indicates her urgency.  Sometimes the double-page pictures will include several settings to indicate the passage of time and Frances Perkins's engagement with all kinds of people and workplaces.

One of my many favorite illustrations spans two pages.  Night has fallen.  Frances Perkins is back in her single room, her bedroom. Light glows from two lamps, one at her bedside and one on the wall near a mirror over her chest of drawers.  There is a single chair in the room.  Across the red, white and blue quilt on her bed is her dress, her Women's Suffrage sash and her hat.  Her shoes are next to the bed.  Frances, wearing her night clothing, is standing on a soap box practicing speaking aloud in front of the mirror. Nothing was going to stop this young woman in her endeavors.


While you may have heard of Frances Perkins and read of her when she is mentioned in US history textbooks, this book, The Only Woman in the Photo: Frances Perkins & Her New Deal for America written by Kathleen Krull with illustrations by Alexandra Bye, will expand your perceptions and knowledge of the depth of this woman's remarkable life and her influence then and today.  At the close of the book is a page and a half titled The Power of Frances Perkins.  Following this is a list of sources.  I highly recommend this title for your personal and professional collections.  It will promote discussions and further research.  Trust me.

To learn more about Kathleen Krull and Alexandra Bye and their other work, please follow the links attached to their names to access their respective websites.  Kathleen Krull has an account on Facebook.  Alexandra Bye has accounts on Behance, Instagram and Twitter.  At the publisher's website you can view interior images.  Here is a link to a curriculum guide. 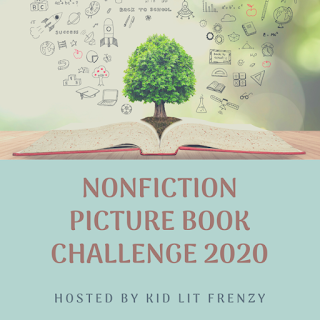