Bells are used for signals, requests, music, warnings and demands.  Ringing wakes us as an alarm when it's time to get up each morning.  Bells begin and end the day at schools and factories. (Did you ever notice how the same sound changes in meaning at the start and end of the day?)  The sound of a bell can announce our presence as visitors.  It can indicate the need for  ourhelp as customers.  Bells come in all shapes and sizes and their purpose is as varied. 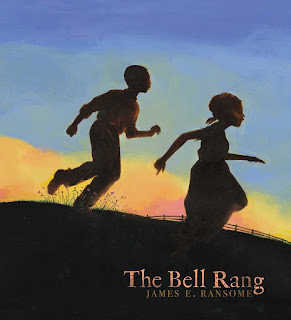 The ringing of a bell should never represent for any individual the beginning of another day as a slave. In The Bell Rang (A Caitlyn Dlouhy Book, Atheneum Books for Young Readers, January 15, 2019) written and illustrated by James E. Ransome we follow a family of slaves for eight days.  In those eight days there is a tragic sameness, astonishing strength and the glow of hope.

Monday
The bell rings,
and no sun in the sky.
Daddy gathers wood.
Mama cooks.
We eat.

As the child narrator, a young girl, continues, her parents and older brother each envelope her with affection; a hug, a kiss and a touch. They and the other slaves leave and walk to work in the fields as the overseer, riding on his horse, leads them.  All the younger children spend the day with Miss Sarah Mae.

On Tuesday the familial love is the same.  The backbreaking work continues.  The younger children play in safety.  Wednesday is different.

When Wednesday comes her brother Ben does not touch her or wave to her.  He kisses her on her check, hands her a doll he made from small twigs and fine cloth.  He whispers words in her ear before he joins his two friends, Joe and Little Sam.  All day the child and the doll, Miz Ida, are inseparable.

Sadness and cruelty fill the day on Thursday.  There is pain and tears and a gun in the overseer's hands.  Ben has run away with his friends, Joe and Little Sam.  Another day passes in sameness and silence.  On Saturday a shift settles over Daddy, Mama and their daughter.  A sudden arrival generates fear and more pain but also hope for one family.

On Sunday there is no bell.  Slaves gather to hear preaching down by the creek.  There are words, songs and prayers for freedom.  On Monday . . .


To measure this narrative through the days of the week James E. Ransome easily engages readers.  Those seven twenty-four hours periods mark all kinds of events universally for most people.  Using the same four sentences for most of the days does supply readers with a rhythm but also fashions a high contrast for those days when those phrases are not used or changed.  It allows us to feel the pain of loss, the pain of being left behind and the intense hope of freedom realized. With the younger sister as narrator we are deeply connected to this story.  Here is a passage after Ben has left.

Ben gone.
Joe and Little Sam all ran.
Mama cries
all the way to the field.
Daddy's face
looks all wrong
as he walks
with the other slaves.
Many with mad looks,
some with tears.


When we think of freedom many visual depictions come to mind.  Upon opening the dust jacket the blue-hued sky extends over the spine as does the darker golden yellow and rosy pink.  As our eyes move to the left, on the back, the rosy pink area is enlarged.  Two cabins, smoke curling from chimneys are shown there on a bit of green.  Another girl is running behind the two children shown on the front.  Surely children running without fear is a sign of freedom or the promise of freedom.

On the book case covered in a rich blue with a cloth spine is a single element.  In the upper, right-hand corner an embossed, foil swallow is in flight.  It is copper in color.

On the opening endpapers from the perspective of looking up we see a scene of daybreak sky in yellow, gray-blue and sky blue.  Clouds spread across a portion.  The bell is ringing.  Four swallows fly past.  On the closing endpaper higher in the clouds a single swallow flies against a vivid blue sky.  This is also the canvas of the Author's Note.

Rendered in acrylics the eloquent paintings of James E. Ransome summon understanding in readers.  From the ringing of the bell by the overseer on the initial title page to wood being chopped near a cabin with an extensive landscape in the background on the formal title page to the first intimate portrait of the family sitting in front of the fire eating their breakfast, we are taken back in time to another place.  The flow of the brush strokes, the use of light and reflected light, the gaze of the girl, the gentle touch of a brother's hand or the details in their dwelling all contribute to a near sensory experience for readers.

When featuring the parents in the morning or when they say good-bye to their daughter, James E. Ransome blends their actions as a partial overlay.  For many of the pictures they extend, page edge to page edge, on full pages.  Other images span two pages for emphasis.  Readers should take notice of the birds in flight over the gathered slaves on Sunday.

One of my many favorite illustrations is on a single page with a crisp white background.  It begins with Daddy and his arms wrapped about his daughter in a hug.  They are both smiling at each other.  Beneath this Mama is bending down to give her daughter a good-bye kiss on her forehead.  The father's left arm blends in with the mother's head and back.  It is a scene of love and strength.


You cannot read The Bell Rang written and illustrated by James E. Ransome without being deeply moved.  With each page turn the words and paintings take you into these eight days.  We get a real sense of family, the desire for freedom, the despair, fear and pain of enslavement and ultimately hope.  This book is highly recommendation for all collections, personal and professional.