For those who dedicate their lives to the education of children, the time devoted to this profession does not begin or end at a certain hour each day nor does it begin and end during the allotted school year.  For many this extends into tutoring academic subjects, coaching sports, advising club members, chaperoning class trips or school-sponsored camping expeditions or instructing at night classes to children or adults.  For still others it includes hours in preparation for teaching on Sundays (or other Sabbath days).

For more than ten years I taught students, usually at the middle school level, during Sunday school classes.  Having worked with this age group in a public school setting for twenty-one years I was well aware of the challenges.  An individual's spiritual life is extremely personal. 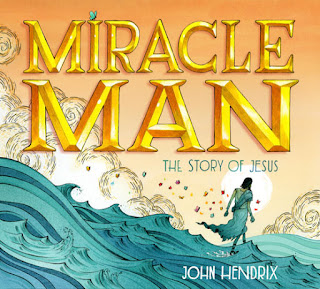 It's a rarity to find a title of distinction which would be an asset in the religion section of a public school library and valuable to those teaching Sunday school.  Miracle Man: The Story of Jesus (Abrams Books for Young Readers, February 9, 2016) written and illustrated by John Hendrix is such a book.  The stories are familiar but the interpretation by John Hendrix in his text and illustrations is extraordinary.

Walking on this land among these people was a man whose words cured the sickness, the blindness and thirst.  When he called to a group of unlucky fishermen, their nets filled with fish.  He asked them to follow him and they did.  When these fishermen witnessed the faith of a leper and his healing, they knew this man was like no other.

In search of a miracle, friends made a hole in a roof so a sick child could be placed in front of Jesus.  After hearing the words of this man, the child left the pallet and walked out through the crowd.  As the numbers of people grew who believed in these miracles, not all liked what he was doing.  These men of wealth and importance feared his power.

The waters of a stormy sea are calmed at his command during their travels.  When he left to rest, tired of the work, the disciples carried on worried conversations but the Miracle Man returned cooking a breakfast of fish.  He then fed thousands with five loaves of bread and two fish.

A sea crossed again in darkness revealed an ability to walk on water.  During a meal words were spoken of a betrayal.  That night this man who performed wondrous deeds was surrounded by soldiers and taken away to be sentenced to die.  His enemies sought to silence his words, stop his actions and eliminate his power.  One final wondrous happening by this Miracle Man gave them his answer.

With the introductory words by John Hendrix as quoted above readers are transported back in time to the world into which this man came.  Each portrayal, the gathering of the disciples, the multiple miracles, the final meal and betrayal and the resurrection, are written based upon accounts from various versions of the Bible but as Hendrix understands them.  He writes with clarity selecting words which vividly describe each setting, the people and the work and words of Jesus Christ.  Here is another passage.

One evening, the Man told Peter to find a boat.  He said there was work to be done on the other side of the sea.
As the tiny boat set out, the waves began to grow.  Soon a great squall was breaking high over the deck.  These fishermen were very good sailors, but the storm terrified them.
The wind and rain raged all around, but the Miracle Man was sleeping! Peter cried out,

DON'T YOU CARE IF WE DIE?

When you open the dust jacket there are two separate images on the front and the back, both referring to Jesus walking upon the water.  In the first the symbolic butterflies are following him with one placed upon a single letter in the title.  The flow of waves and water extend over the spine to the left into the visual of Jesus reaching out to a struggling Peter asking him to have faith.  This back picture continues to the flap edge.  John Hendrix's signature typography appears more prevalent in this second illustration.  For the book case the final two pages of the book are represented.  The rich black of the tomb's interior supplies a stunning background for the colorful butterflies and the Miracle Man walking out the opening into the warm hues of a bright, sunny new day.

The opening and closing endpapers in white each provide a canvas for butterflies but readers can easily see the difference between the two; forming their own opinions as to why Hendrix choose the elements he did. This white is continued after the page turn with a wide gray border at the bottom and a silhouette of the fishermen in their boat placed on top to the right.  Written in branches of wood are Miracle and a portion of the m.  The word Man is completed in the next double-page illustration as the narrative starts.

Rendered in pen and ink with fluid acrylic washes on Strathmore Bristol vellum most of the images extend across two pages.  One of the things which make these illustrations exceedingly stunning is the transformation of portions of the text in size, color and style.  Many times Hendrix will incorporate the text into the elements of the scene.

The chosen color palette is a glorious blend of warm and cool colors depending on the particular depiction. The hues flow shifting with the words.  A single exception is when two sentences are placed on a background of white which carries over to the right where Jesus is shown carrying the cross.  A line is drawn in the dirt, left to right, as the cross is dragged.

Careful readers will see other Biblical references hidden in the illustrations.  On the double page spread representing the betrayal as the soldiers circle Jesus in the garden, a rooftop holds a serpent and a partially eaten apple.  Hendrix plans on supplying information about the other "Easter eggs" in future blog posts for children.

Those two words form the buildings of the village.  In the background the healed young man is skipping into the distance.  In the foreground Jesus' back is to us with his right hand raised.  In his left hand he holds a staff made from a branch.  In front of him are persons shown in the details of warm limited colors.  Jesus is portrayed here, and throughout the book, as a man of his time and geographical region would appear.

Miracle Man: The Story of Jesus written and illustrated by John Hendrix is a beautiful celebration, a tribute forged in faith.  I have read this silently and aloud.  I have studied with great appreciation the illustrations.  This book, regardless of your religious beliefs, is a work of art.  In a personal two page author's note Hendrix offers an explanation as to the writing and illustrating of this book.  This is followed by a selected bibliography and words about the illustrations and the research for the artwork.

To learn more about John Hendrix and his work please follow the link attached to his name to access his website.  This is a link to his Tumblr pages.  Enjoy these two tweets.


UPDATE:  A book trailer was released.

UPDATE:  John Hendrix talks about the writing of this book at The Rabbit Room.