The lines shaping who we become, are colored in by the people who enter and leave the days of our lives as well as our response to them.  For readers those numbers increase by leaps and bounds being introduced to real people in works of nonfiction and truly memorable characters in all forms of fiction. Probably more than we understand, these additional people, rarely met outside the pages of a book, influence and inform our personalities in varying degrees. 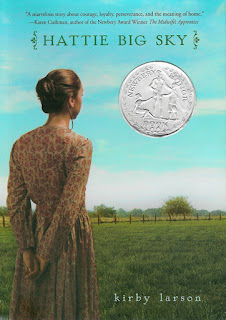 To connect with a real or imagined person, who has faced and conquered obstacles whether similar or different than ours, is to make their story part of our story.  In 2006 author Kirby Larson, introduced readers to Hattie Inez Brooks, a sixteen-year-old orphan.  Hattie left Iowa in December, 1917, never having felt welcome in the home of her Uncle Holt and Aunt Ivy, to live on her late Uncle Chester's homestead near Vida, Montana.  Hattie Big Sky, winner of a 2007 Newbery Honor award, is the story of her successes, failures, happinesses and heartbreaks as she set forth to "prove up the claim".  We were immersed in those, meeting a cast of characters who helped and hindered her attempts, as the history of the time swirled around them all. 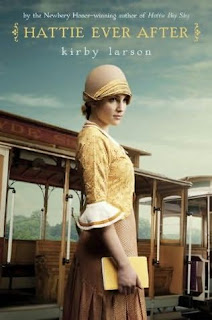 On February 12, 2013 Hattie Ever After celebrated a book birthday.  Kirby Larson brings us back to Montana in June of 1919.  She opens the door; we gladly step through into a past we have come to know and love.

As she did in the previous title a letter begins chapter one.

Dear Perilee,
You will never guess what I am posting in the mail besides this letter to you: my last check to Mr. Nefzger!  After these long months, Uncle Chester's IOU is paid in full. ...

Hattie finds it ironic she is making money doing the very thing which she left Iowa to avoid; cleaning and cooking in a boardinghouse.  She harbors a secret dream though; being a newspaper reporter after her articles, Honyocker's Homily, sent back to Iowa were published in The Arlington News.  Fate decides to intercede in the form of love.

Long-time friend Charlie Hawley, back home from his service during World War I, questions Hattie about their relationship when he makes a surprise visit.  The wardrobe mistress of a group of performers staying at Brown's has unexpectedly run off with a member of the cast.  A letter for Hattie's deceased Uncle Chester from a mysterious Ruby Danvers is forwarded to her.

These three seemingly unconnected occurrences chart a course for Hattie's new future.  Still unsure but determined to pursue her dream she finds herself in San Francisco as Charlie begins his new career in Seattle.   From Big Sky Country to big city living, we shadow Hattie as she makes her way.

People and moments connect in a chain of events leading to Hattie's employment at the San Francisco Chronicle as...yes...a night crew cleaning woman.  Her curiosity to uncover the truth about her uncle's past, her instinctive nose for news, her beliefs about human nature and her baseball pitching skills, learned from Charlie, all contribute to her being at the right place at the right time.  Plenty of excitement from the good and not-so-good people who cross her path lead Hattie to the best possible outcome.


With precise and painstaking research, Kirby Larson places her vivid, true-to-life characters within a historical setting so real, readers feel as though they've willingly ridden on a time machine.  Through dialogue, letter writing and musings by Hattie we are privy to the distinguishing personality traits of each person in Hattie's world.  With adept skill in her use of words and language Larson conveys a depth of emotion completely captivating her readers.  Here are a couple of passage from Hattie Ever After. (It was hard to narrow it down to only three.)

First impressions might lead one to think that a newspaper morgue was as quiet as...well, as a morgue.  Not that I knew about that firsthand.  But I did not think of "my" morgue as quiet.  Even in the wee hours, a symphony of sounds reverberated throughout this place.  First heard was the thump as one weighty volume was slid from its shelf, followed by the satisfying thump as it was placed on the library table. Then the whisk-whisk refrain of pages being turned enhanced the concerto.  One last set of sounds rounded out the music of a city's memories; each time I delved into those huge leather books, each time I traced my finger over the yellowed columns of newsprint, each time I studied a worn and faded photograph, papery whispers spoke to me of things that had happened long ago, and in so many places it would take an entire atlas to contain them all.  These stories were as irresistible to me as the Italian nougats one of Maude's suitors had brought her.

At the door, he took my hand.  When his palm slid next to mine, it was like a key slipping into my heart.

Lacy clouds frothed around the seaplane like spun sugar.  We continued to push through to the clear sky above, and I pushed myself up in my seat, worries dissolving like the clouds.  There was no room for fear when faced with such a vista.  From my ever-ascending perch, I could take the city in all at once:  the Palace of Fine Arts, the wharves, Nob Hill.

In an interview Kirby Larson said, of Hattie Big Sky,  the story caught my heart when explaining her purpose in writing about Hattie.  She then goes on to say readers will know if a story is from your heart.  When continuing to tell the tale of Hattie's life after leaving Montana, the fullness in Larson's heart for this character has filled the pages of this remarkable new title, Hattie Ever After.  I have read it twice; receiving an ARC earlier, again after it's release and many of the treasured marked spots repeatedly.  This is historical fiction at its very finest.  Hattie Inez Brooks will become part of your story.